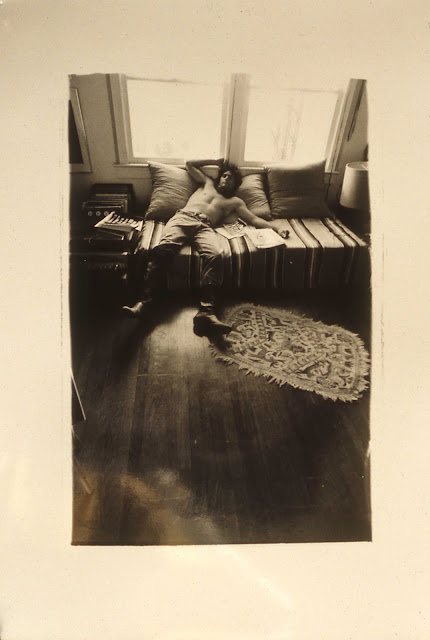 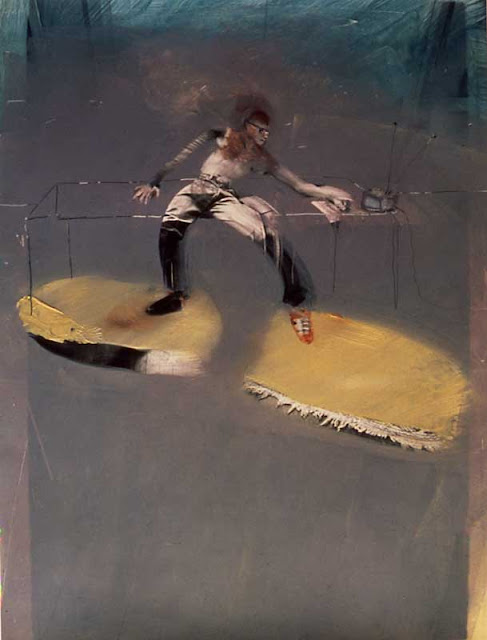 My husband Bob and I have always had issues with the TV.  We are addicts, Bob worse than me.  We have tried different techniques over the years to try and keep our addiction under control, but now, past midlife, we have finally given in to the dark side and have a flatscreen TV and cable.  Our only nod to our addictive selves is that we don't have a huge TV, just a mid-size one--kind of on the smallish side.  This painting is about that addiction; the little TV with the rabbit ears our attempt to keep the importance of the TV to a minimum.  Of course we both watched it all the time, so it was kind of silly.
I recently found a slide box full of before and after images, showing what the photographs looked like before I painted over them.  In this photo, Bob had collapsed on the couch, tired from doing some kind of physical labor. The painting is so much more elegant and interesting than the photograph, although you can see the connection between the two.  For example, one arm is "real", the other wiped so that the cushion on the sofa becomes the structure of the arm.  I think what is most interesting in Man with TV is that the painting reveals something that couldn't be described otherwise:  a reclining man in a gray world completely absorbed in the small square box in front of him.﻿
﻿
﻿
Posted by Holly Roberts at 4:43 PM 1 comment: Links to this post 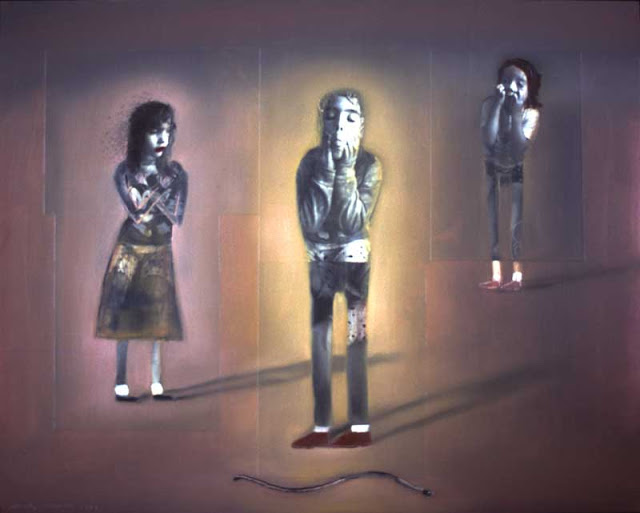 I hadn't seen "Black Snake" in quite some time, and had forgotten just how much I liked it.  I was visiting a friend who happens to have a large collection of my work, this being one of them.  We walked around to the different rooms with my paintings in them, and when we came to this one, I stood in front of it for quite some time.  My friend began to talk about the painting, and what it meant to her.  She talked about the snake and how it could mean so many things:  betrayal, heartbreak, money problems, rivalry, revenge.  She felt that each girl was reacting differently to the implied threat of what the snake meant.  I listened, fascinated.  When I made the painting I had photographed  my daughter, Ramey, when she was four with her younger friend, Emily.  They had been making faces, using their hands to twist their features into bizarre shapes.  Once I started combining the paint with the photographs of the girls, I realized that they needed something to look at, so I  added the little black snake.  I thought what my friend brought to the image was  more interesting than what I had thought about when I made the painting, and I liked that it spoke in a stronger, clearer voice living at her house than it had in mine.
Posted by Holly Roberts at 2:00 PM 2 comments: Links to this post 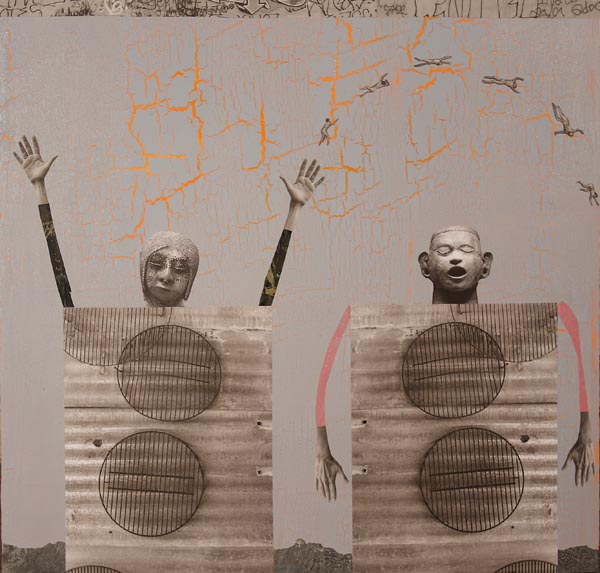 Posted by Holly Roberts at 3:08 PM No comments: Links to this post 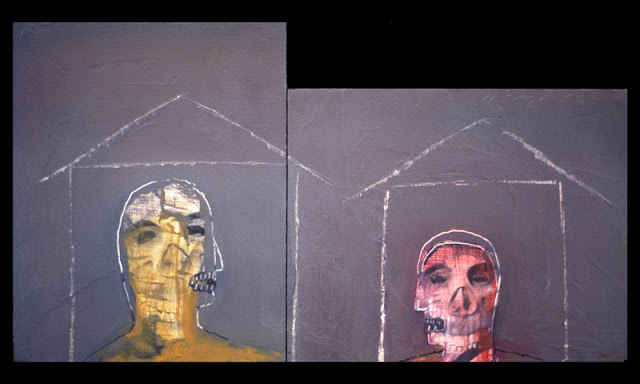 For a month people dickered and argued and hurled accusations at each other.  Who were we to trust?  The Supreme Court in Florida was called in, overturning a state court decision not to extend the time limit to recount the ballots.  Then the US Supreme Court overuled that decision, which disallowed the recount. It was a horrible time for all of us, those citizens who had marched in on that Tuesday in November and cast our ballots.  There was anger and fear everywhere with the media painting a bleak and horrific picture of what could happen if we couldn't decide on a president. I was left with feelings of hopelessness and despair.  Why was it that this problem couldn't be solved in a way that didn't involve so much hatred and bitterness? It was the Quarrel to end all Quarrels, and gave us an inkling of what was to become of future politics in America.
Posted by Holly Roberts at 3:07 PM 1 comment: Links to this post