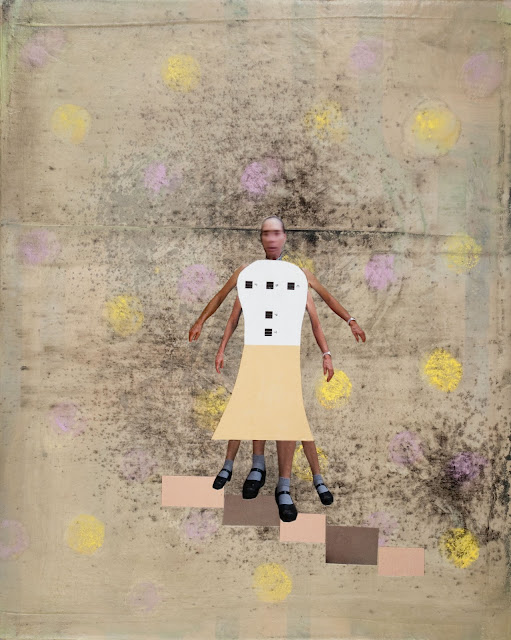 What rattles around in an artist's brain?  When I did "Woman Descending a Staircase" I had a vague memory of Duchamp's Nude Descending a Staircase, not an image that particularly resonated with me, but one that I knew from my art history.  In my mind, I was doing the Holly Roberts version of Duchamp's masterpiece.  Come to find out that I was not the only one, and that Duchamp was probably using Muybridge's wonderful study from 1887 as inspiration for  his controversial and naughty piece.  Good company indeed!
Posted by Holly Roberts at 3:25 PM No comments:

When we first moved to our home in 1991, the street was almost empty, with only a few houses.  Directly across from us was a family with three girls; a teenager and two younger girls, closer to the ages of our daughters.  The eldest daughter became our babysitter, and then several years later, she posed for me.  She had shaved her head, leaving a forelock which she dyed black(she was blond).  Heavily made up for our shoot, she chose to wear a simple black dress and high heels. She was fifteen, and not long after that, as a troubled teenager, she left home and moved to California.  Things continued to be difficult for her, and finally, she was diagnosed with bipolar disorder.  This past Wednesday her mother called me to tell me that she had died, probably due to a bad combination of alcohol and prescription drugs.  She was thirty-nine.

When my young neighbor posed for me I saw a beautiful young girl, marking herself as different with her radical haircut, the height of punk fashion. I had no idea of what was to come when I did this painting, but now,  I'm stuck  by it's prescience, it's accurate portrayal of what was going on, both inside and out.
Posted by Holly Roberts at 3:55 PM 1 comment: