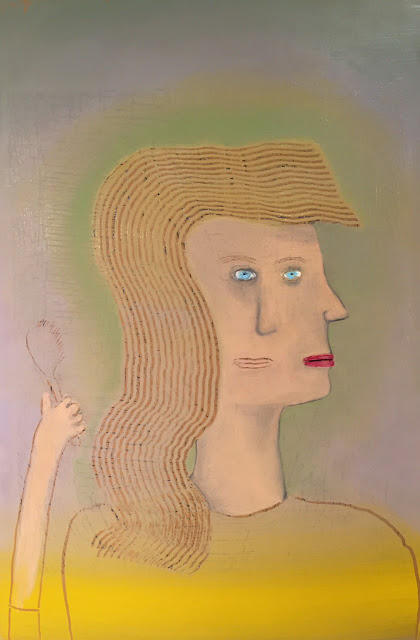 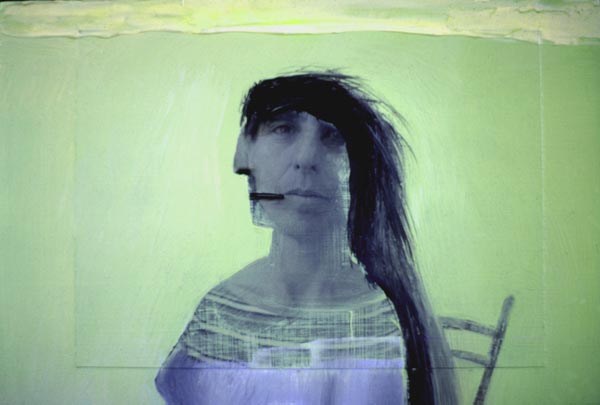 I recently started painting with oils again after a 14 year hiatus. It was serendipitous really, a friend having just given me about 20 tubes of Gamblin oils.  http://hollyrobertsonepaintingatatime.blogspot.com/2017/04/floating.htm  I had plenty of tubes of oil paint in my studio that were left over from my oil painting days, but these new ones were colors I had never used before.  As well, I've been a little lost in the desert for the last couple of years with my old techniques and have been unsure of where I'm headed.  So, It's been interesting watching myself using this media that I was once so familiar with, but am now relearning, both in technique and approach.

17 years ago, in 2000, when I did "Woman with Black Hair" I was basing my painting on the photo that lay underneath.  Although I've never been able to preconceive what the final painting would look like, I knew when starting that the image would have something to do with the photo, no matter how little or how much was left of it in the final painting.  Now, however, my creative self seems not to want to have anything to do with any photos, and my guide to what I'm going to paint seems to be the paint itself rather than the photo underneath.  "Woman Brushing Her Hair" does have an image buried beneath the paint, but nothing of it exists in the final piece.  As always, I have no idea of where I'm headed, but I do seem to have a very clear directive to just let go and allow the paint and my brushes to call the shots. Although this is the essence of how I've always made my work, there seems to be a new sense of confidence that didn't exist before. It understands that I just need to get out of the way, and that once I do, everything will be alright.
Posted by Holly Roberts at 8:20 PM No comments: 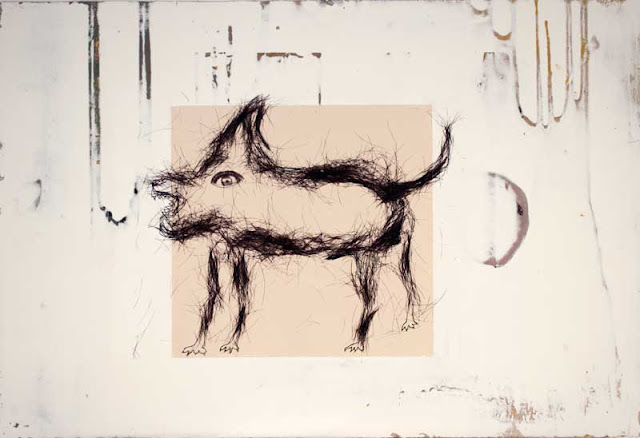 In trying to make drawings that took away most of my control, I came up with the idea of using dog's hair. While petting our dog Sophie, idly collecting her hair in my hand as it came off, I suddenly saw the beautiful chaotic spiral that the hair made. I put the clump on a sheet of white paper, and took it out to my studio where it sat for several weeks.  I finally got around to photographing the hair and then tried using the image as an abstract, but my figure making self wouldn't allow me do it. I began to "draw" with the hair.  It seemed only fitting that one of the first drawings to come out of this new process was of a dog, an alert male dog doing his dog job of letting the world know that he was taking care of things.  Since then, I have done many more of these "hair drawings", and have begun to amass baggies full of not only dog's hair, but my own(from my hairbrush), my husband's and different friends hair after haircuts, not to mention wire, cord, metal findings, frayed rope, dried snap pea stems and tiny wadded pieces of paper sprayed with India ink.  The most banal and mundane objects in my life are now all grist for the mill. 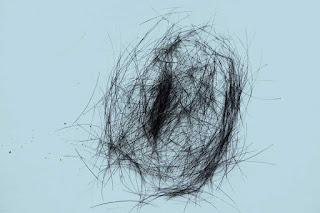 Posted by Holly Roberts at 6:05 PM No comments: 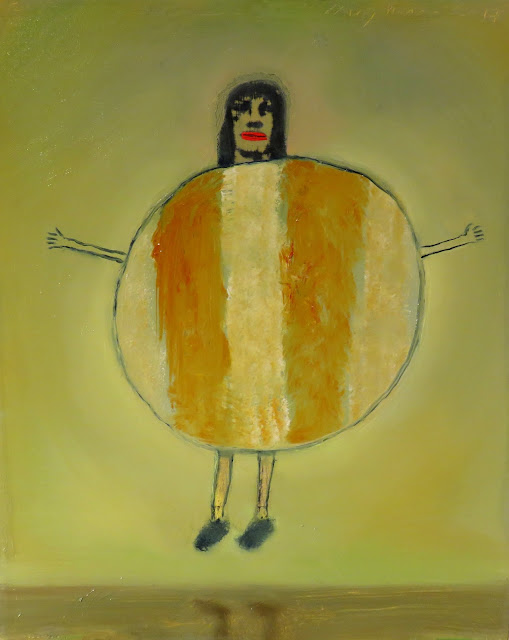 In 2004 I turned my back on the paints I loved, and started painting with plastic.  I had painted with oils for over 30 years, and found that I didn't have anywhere else to go with them.  With the acrylics, I had an entire new planet to explore, and explore I did.  Now, 13 years later, with about 20 tubes of Gamblin oils given to me by a friend, I find myself, once again, painting with oils. It's a very different experience from the acrylics I've become used to--like going from a Unitarian service in California where everyone is wearing flip-flops, to high mass in a Catholic Church in Rome where there are candles and chanting and mysterious men clad in dark robes and funny hats. The oil paints have a rich heaviness and stay wet forever, letting me blend colors and add and change things even a day or two later, while the acrylics, while immediate and fresh, once they are dry, or drying(within minutes of being applied)can't be altered.  I'm rediscovering my brushes from 14 years ago, and remembering what each one does, some with only a hair or two left from so much use.  I'm not sure where this will go, only that I don't want to repeat what I did all those years ago, hoping that I will find a different way to marry my photographs with paint.
Posted by Holly Roberts at 4:03 PM 2 comments: