One of my students this past year happened to be Connie Carpenter, known, among other things,  for being the first woman to win an Olympic Gold medal in cycling.  She took two--three week workshops with me, and during that time I had the great pleasure of getting to know her and her husband, Daivs Phinney.  Davis, also an Olympic cyclist, has Parkinson's Disease. The Carpenter-Phinneys have a foundation http://www.davisphinneyfoundation.org/?gclid=CjwKEAjw0LmoBRDHuo7UkaKXhn8SJADmDTG0tleCTBId9_KYZ-rZruyjHNMtPhwu-6LOnb2S1A4WbRoCKkLw_wcB and that's where most of their time and energy goes.

I asked Davis to pose for me after I saw him changing his shirt one morning in the parking lot of the Aspen Country club(Connie, Davis, and I had spent the morning cross country skiing on the groomed tracks of the golf course).  In addition to having a great torso, he has a small device, the size of a pack of cigarettes, inserted under his skin on the right side of his chest.  Wires travel from the device up to his brain and help regulate the tremors caused by his PD. It was wonderful in a futuristic, bionic kind of a way.

In the short time I had getting to know Davis, he became my hero.  This is a man whose life was  taken off course in a pretty severe way, a world class athlete whose athleticism was his passion, his profession, and his connection to the world.  He had the flexibility to just change lanes and continue on, making whatever adjustments he had to to continue to live his life as fully as possible--a life full of humor, warmth, and generosity. As I age, and  see and understand the difficulties of illness in myself and in those around me, I think of Davis and the gift he has given me, the gift of seeing how it's done when the going gets tough. 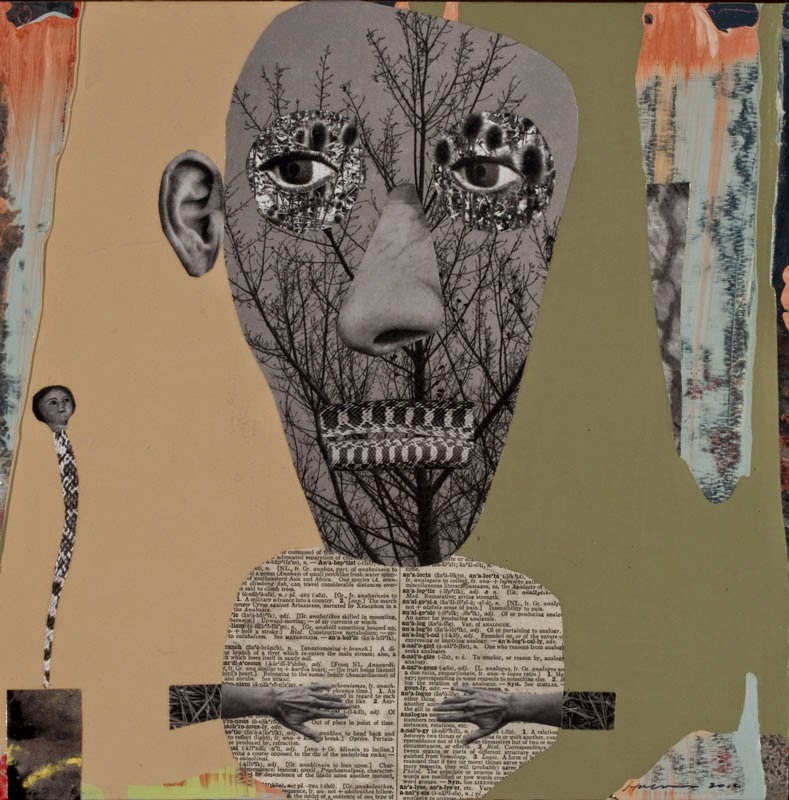 On a recent bike ride with my husband, I noticed that his rear tire was wobbly--very wobbly.  Later that week,  I took the tire into the bike shop to have it looked at, and it was as we had surmised--a broken spoke. I asked the owner of the shop if we had caused it to break in some way, and he assured me that it just happens.  Then I said, "Darn, I was hoping to blame it on my husband", and in unison, all three of the bicycle repair guys in the shop replied, "Oh, it was his fault!" I remarked that they were awfully quick to jump on the husband blame wagon, and one of them said, "It's always the husband's fault", and we all laughed--a universal truth.

That's what this painting is about:  what TV sitcoms like Everyone Loves Raymond, and the new Last Man on Earth base episode after episode on.  The small nagging, female voice.  The large, unaware, "innocent" male counterpart.  The female confronting the male, the male denying culpability, the female not letting him off the hook and, whether he will admit it or not, the male knowing she's right.