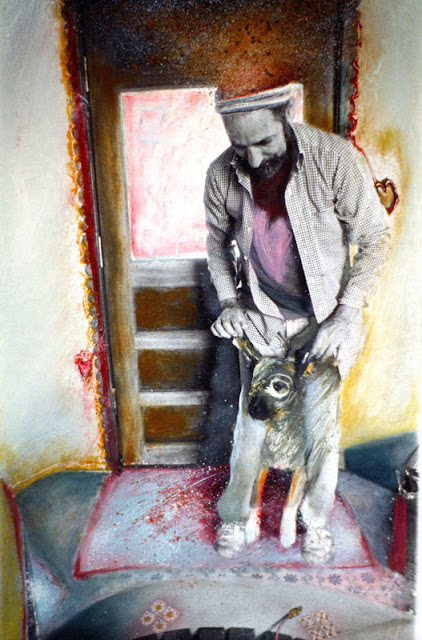 In the fuzzy reaches of my memory, sometime around the age of 8-9, I can remember my mother and father getting a divorce. My next memories are of Nick appearing in our lives.  An artist, Greek, emotional, a great cook, and just generally fun to be with, he took our little family's stilted identity and shook it hard.  There were emotional outbursts, there were wild rides in our 49 chevy pickup truck through the pinon trees, and there were dinners filled with good food and many different friends, and lots and lots of laughter.  He and my mother married and he remained my stepfather for the next 20 years until he and my mother divorced, bitterly.

Nick is now 88 and living in assisted living.  His mind is going fast, on a faster downhill slide than his body, which is still fairly healthy.  We had great hopes for him in assisted living, a lovely place full of activities and active, interesting older people.  But this has not happened.  He is constantly in hot water with the establishment:  sunbathing in his underpants in the large central courtyard, letting his little dog Koukla loose to poop and go after other dogs(that are on leashes), then forgetting and leaving her outside to roam and upset people.  He gets lost on a regular basis, forgets his walker, and has alienated many of the female residents by his liberal use of  the word  "fuck".  Koukla has been banned, and he is heartbroken.  Cracks are beginning to appear between family members working to figure out what is best as we inch toward the possibility of Nick being booted out of his current home.

I emailed a friend whose ex-husband, a victim of Alzheimer's,  died recently to ask her about his last accommodations, a place called the Retreat, here in Albuquerque.  Her response was positive, but what she said at the end of her email is what stayed with me the most , "This whole process is so hard and so sad".  And she is so right.
Posted by Holly Roberts at 5:18 PM 2 comments: