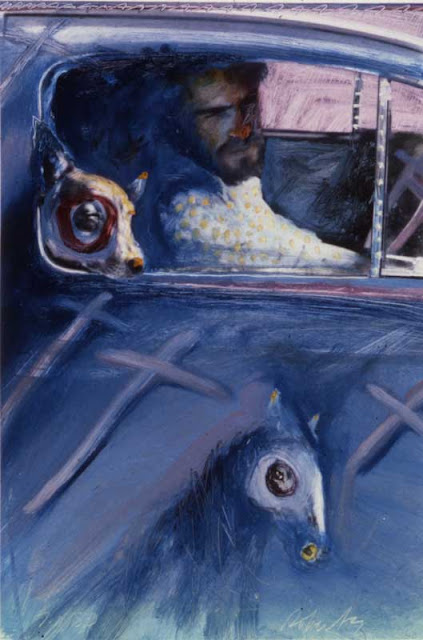 We decided to take a road trip, visiting the different reservations so we could make an informed decision about where we would spend the next four years of our lives.  We drove our 1969 VW bug.  Old, funky, and fun to drive, we had no concerns about bad heaters, zero cooling, and a tiny engine.   We installed horse head decals on either door, and a luggage rack on the roof, which flew off well into the journey.  Mount Saint Helen's had just erupted, and the weather had an odd feel to it.  With our two dogs, Doug and Blackie, sitting on the tiny bench seat in the back of the bug, we drove from Arizona to Washington State in about six weeks time. Along the way we stopped  and spent time with the Zuni's, the Hopis, and the Lummi Nation in Washington to name just  a few.  By the end of the trip, we knew that the Zuni tribe, our first stop, had won our hearts.
Posted by Holly Roberts at 3:53 PM 1 comment: 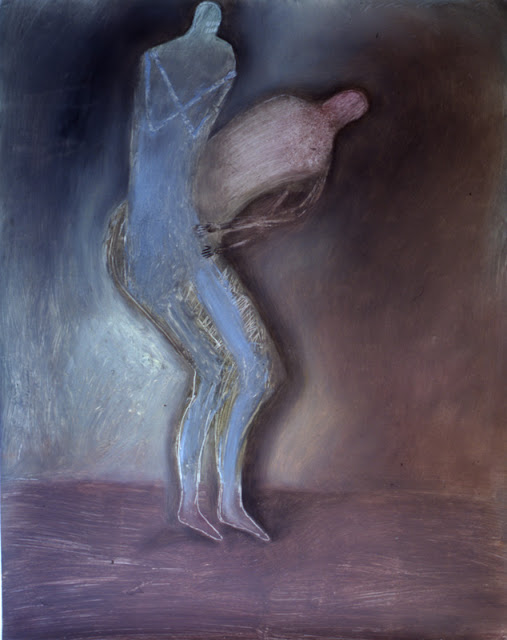 Woman Trying to Step Outside Herself spoke to me of confinement, of trying to move away from fear and lonliness.  At the time, one of my biggest challenges was expanding the boundaries of who I was as a person.  The old Holly wasn't working in many ways, and the new Holly had no idea of where she was to go, just that she had to leave, to move on.
Posted by Holly Roberts at 3:57 PM No comments: 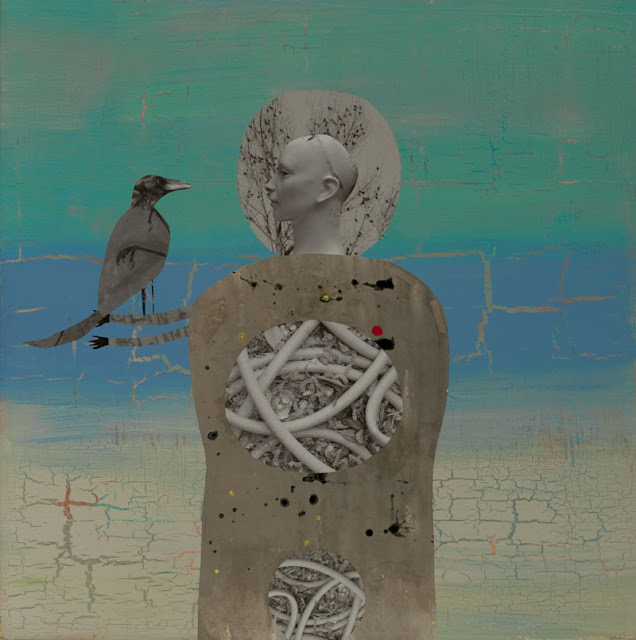 The crow has just landed on the woman’s outstretched arm. She has a halo made from the branches of a tree in winter, filled with small birds. The crow knows he can trust this woman because of her halo. It tells him that she is safe, holy. His body is made of the feet and legs of a dead bird, but his head is alive and knowing. Like the crow, we can see inside the woman through a portal that has made her available to us. Inside are leaves and tubing--her inner workings. They are sharing something profound, a deep connectedness.

Posted by Holly Roberts at 2:51 PM No comments: 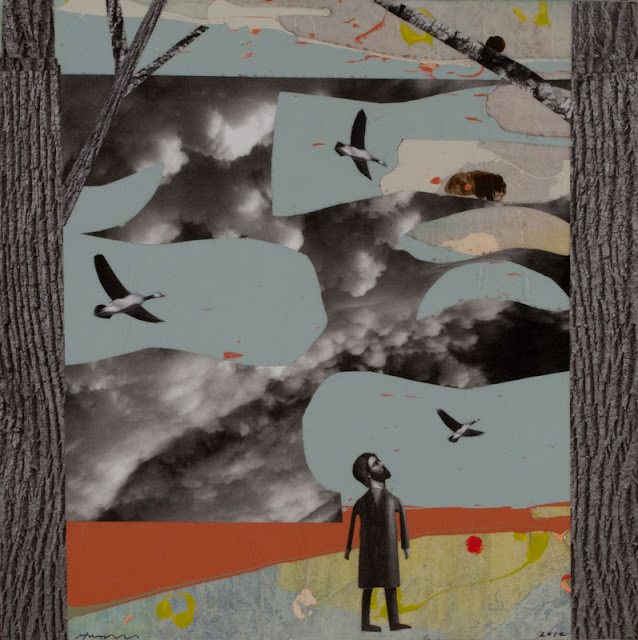 In 1992 I had a young family: two daughters under the age of four. Things weighed heavily on me as I wondered what kind of a world my daughters would grow up in. Among other concerns, I fretted about were global warming and ozone depletion. Although I didn't really understand the concept of ozone depletion, I could picture the big holes in the sky that we‘d been warned about, and so I did a painting. Scratching into the paint at the top I wrote, "He heard on the radio that there was a hole in the sky. He didn't know what to do". The painting sold. A good sign that someone was listening. Now, twenty years later, I've done another painting with holes in the sky. We don’t hear much about ozone depletion anymore, but clearly it was something my unconscious still wanted to discuss. No text this time, but birds and trees accompany the man who looks bewildered, or, at the very least, puzzled at what has gone awry.
. 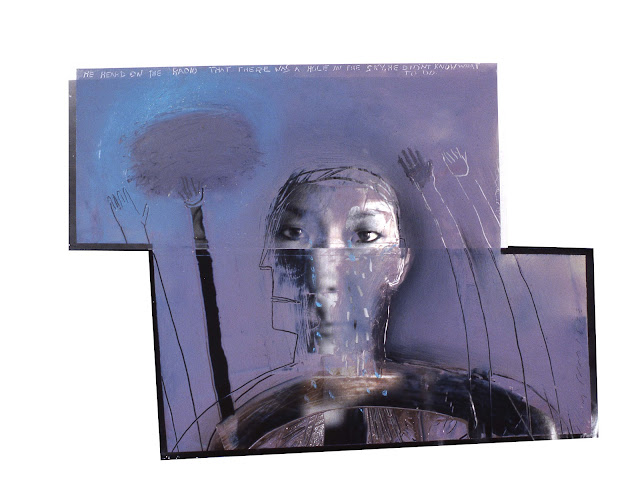 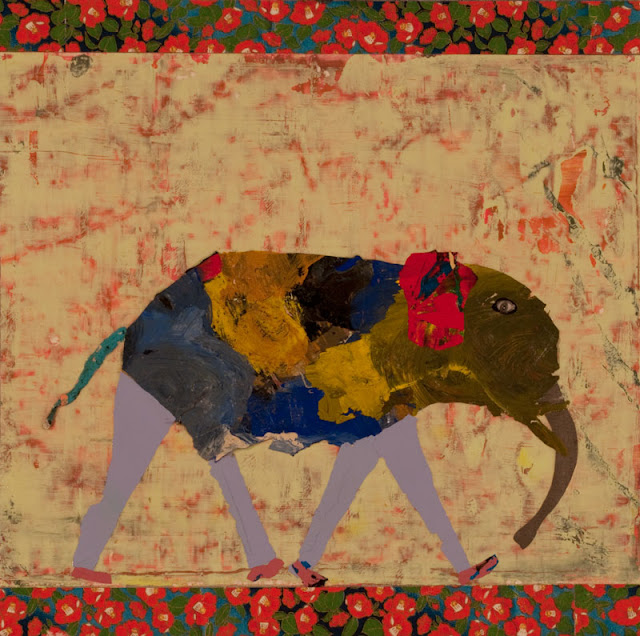 Two years ago, in the fall of 2010 I taught a workshop on solving visual problems using paint and collage.  The last day of the workshop, when everyone was cleaning up, I went around to different students and asked if I could have the paint peels from their palettes as they scraped the old paint away.  Everyone was happy to oblige, and I brought home an assortment of beautiful acrylic paint peels made by hands other than my own. One of those paint peels spoke to me of being an elephant, so I built this image.

I've written earlier in this blog about The Last Elephant. http://hollyrobertsonepaintingatatime.blogspot.com/2012/03/last-elephant-2009.html Frightened Elephant is The Last Elephant's cousin, or brother, or sister. With their incredible intelligence and awareness, I can't help but think this elephant knows what's coming, and that he's very anxious and worried about the fact that he may be one of the last of his kind.
Posted by Holly Roberts at 4:37 PM 1 comment: