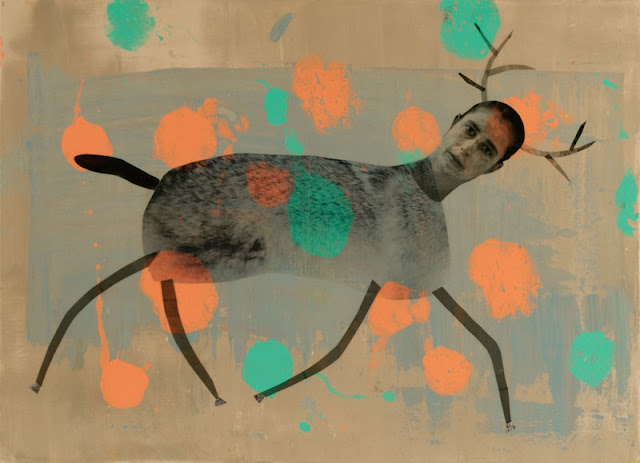 ﻿
In this painting of a young stag fatally wounded by arrows, Frida expresses the disappointment which followed the operation on her spine in New York in 1946, and which she had optimistically hoped would cure her of her back pain.
Back in Mexico, however, she continued to suffer both physical pain and deep depression. In this painting, Frida presents herself with the body of a young stag and her own head crowned with antlers. Pierced by arrows and bleeding, the deer stares out at the viewer from a forest enclosure. Although the stormy, lightning-lit sky in the distance is a brightening hope for escape, the deer will never reach it. One meaning of the word "Carma", which appears in the painting's lower-left corner, is "destiny" or "fate". In this painting, as in most of Frida's self-portraits, she presents herself as incapable of changing her own destiny.
Frida used her own pet deer "Granizo" as a model for this painting. The deer in the painting is surrounded by trees and trapped, transmitting a feeling of fear and desperation, with no way to escape from the situation.

﻿I have always been a fan of Frida Kahlo's, and in the early 80's my husband and I made a trip to her home in Coyoacán, Mexico.  The brightly painted walls were covered with objects, and, like every artist, they were all the things that inspired her.  She had a huge collection of paper mache figures, and I remember standing in front of her bed trying to figure out the easel mounted above it so that she could paint lying down. In the true spirit of Mexico, the security guard was drunk, staggering from  room to room, paying no attention to us at all.

Frida helped me realize that is is possible to talk about very personal experiences, no matter how dark or how harsh.  Her painting, The Suicide of Dorothy Hale was an image that may have influenced my work as much as any other that I know of.  And while my work is considered "dark", it pales in comparison to Frida's.
Posted by Holly Roberts at 2:55 PM