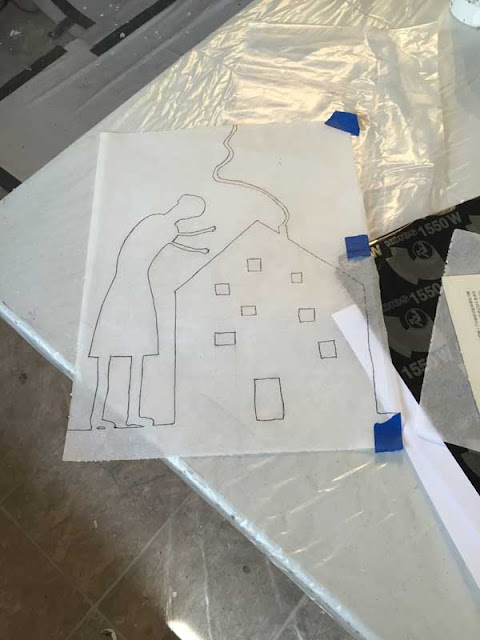 After being asked by Hiroki Morinoue to do a Mokuanga print with him at Anderson Ranch this Fall, I prepare the drawing, taken from the image Big Girl http://hollyrobertsonepaintingatatime.blogspot.com/2011/12/big-girl-2009.html 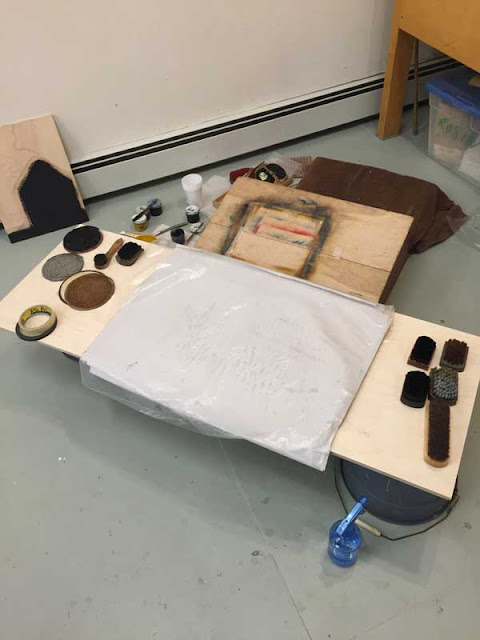 Hiroki takes my drawing and traces it to two bass wood panels. He carves another house as well as the key panel to make the house stand out more, but, in the end, it makes the house too strong and we don't end up using it(the second panel can be seen resting against the wall).  His printing station is located on the floor in a corner of the printmaking shop at Anderson ranch, with Hiroki sitting on a cushion with a two low benches in front of him to work on, all of which can be folded into his suitcase so that he can travel with them. 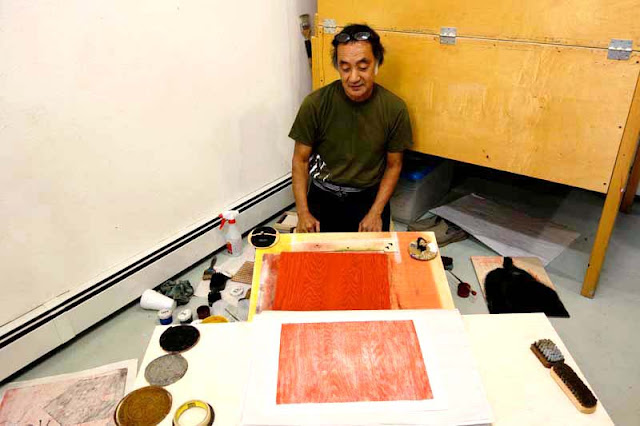 The first run of the print is a bass wood panel inked with red and it will be dropped twice, once for the background, and again, only partially inked, to give the top part of the sky a deeper red.  The "inks" are water colors, and must be kept wet to work.  The pattern of the wood is clearly evident, part of the charm and aesthetic of the print. 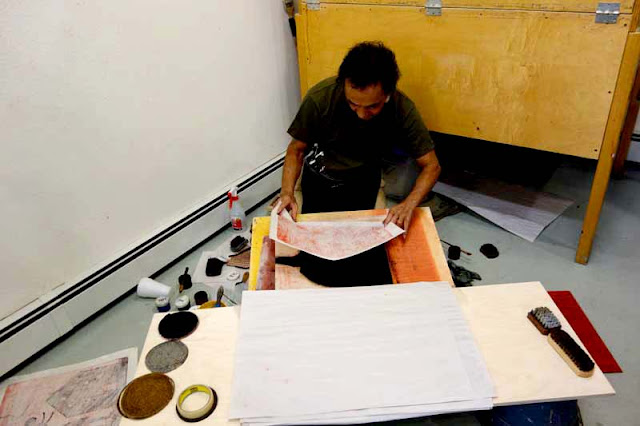 For the third drop, Hiroki registers the thin rice paper, which has been kept damp and stored in the stack in front of him. 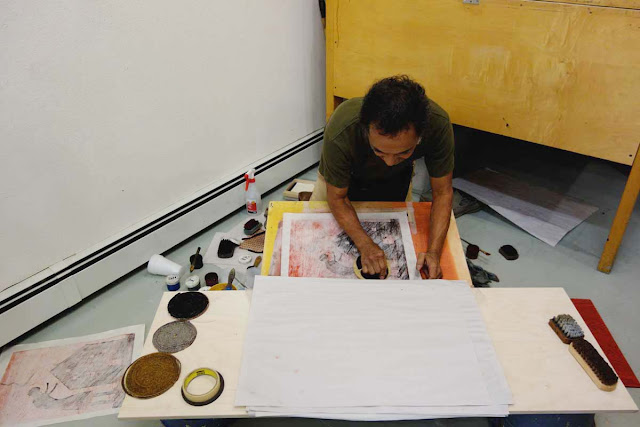 Here you can see Hiroki rubbing the back of the paper with his Baren, transfering the ink from the panel to the print. 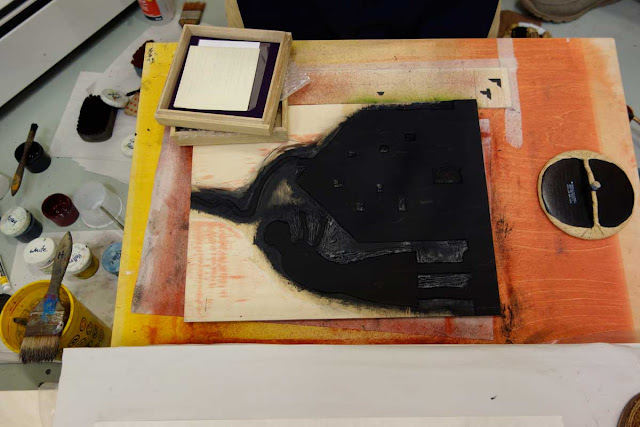 The second panel after it has been painted with black water based ink and then had an image pulled from it. 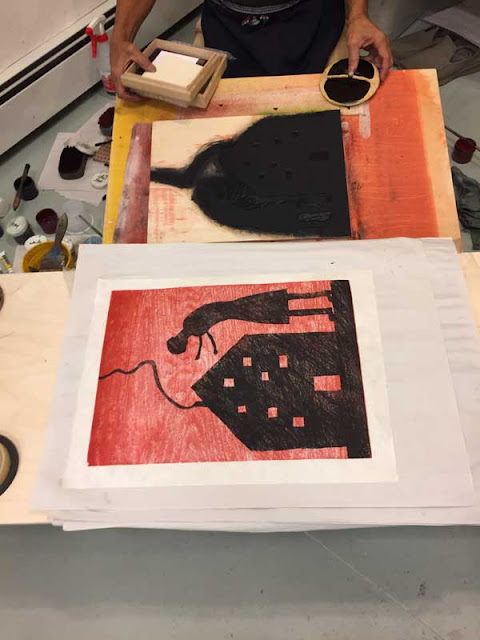 The panel with the freshly pulled print next to it and the round Baren that Hiroki uses to rub the ink in his hand(face down). 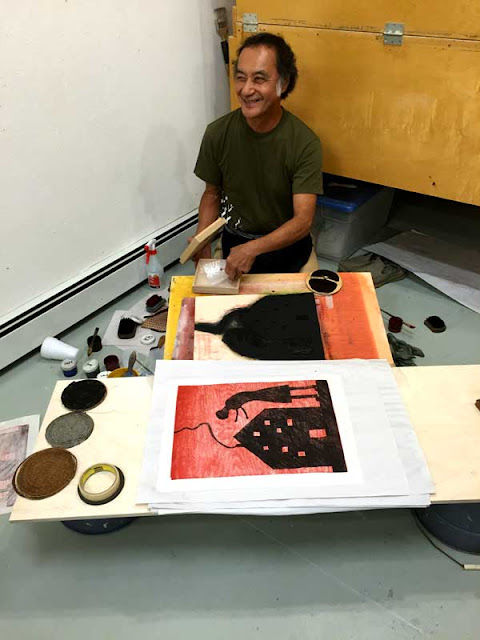 Hiroki, satisfied with the print. 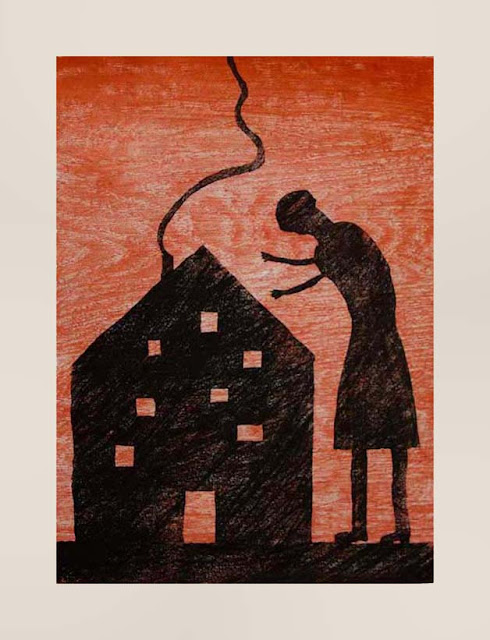 **Woodblock printing in Japan (木版画, moku-hanga) is a technique best known for its use in the ukiyo-e artistic genre of single sheets, but it was also used for printing books in the same period. Woodblock printing had been used in China for centuries to print books, long before the advent of movable type, but was widely adopted in Japan during the Edo period (1603-1868). Although similar to woodcut in Western printmaking in some regards, the moku-hanga technique differs in that it uses water-based inks—as opposed to western woodcut, which often uses oil-based inks. The Japanese water-based inks provide a wide range of vivid colors, glazes, and transparency.  Wikipedia
Posted by Holly Roberts at 2:36 PM No comments: