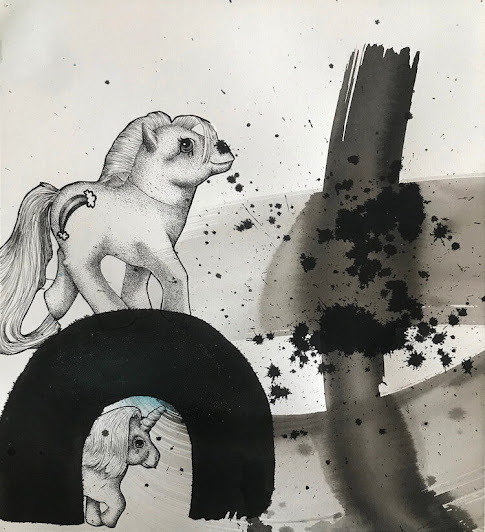 This past weekend my husband and I drove to Aspen, Colorado to see an exhibit by our daughter, Teal Wilson.  The exhibit was at Fat City Gallery, in Aspen Colorado, and was a show Teal had been working towards for most of the summer.  I didn't know quite what to expect, but was somewhat apprehensive since I knew it involved "My Little Pony", the iconic plastic toy pony, first developed in 1981, and which has had several reincarnations since. As an artist, and the mother of an artist, I knew to keep my doubts to myself and hadn't either discussed the work with Teal or really known much about it, aside from the fact that it was "My Little Pony".  However, upon seeing the work, I was, as the cliche goes, "blown away"  by what she had done.  The images, 16 in total, were a complex combination of exquisite drawings of My Little Pony and powerful, black ink washes. But it was the titles that made the show so impactful, each one describing a complex and complicated reality that the ponies were caught up in.  Their cute coyness  became something else by the significance of the titles, titles like "My Little Pony and the Second Between Existence and the Gates of Heaven" and "My Little Pony Peers into the Celestial Plane".  She had done that thing that is so hard to do when making an image: she had captured our complete attention, with skill and patience, so that we had to look at the world in an entirely new way, treading the razor edge of both trite and profound. 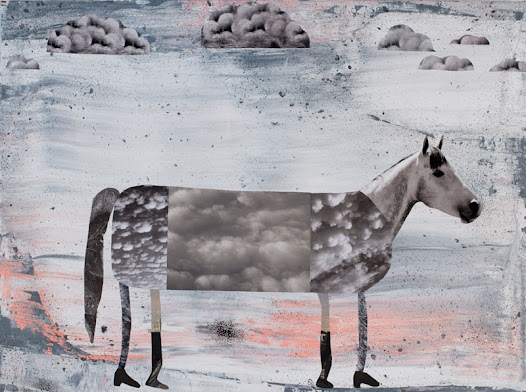 As a four-year-old child, I did some heavy negotiating with my parents:  I would give up my bottle in exchange for a pair of cowboy boots.  Of course, I needed the boots to ride horses, real horses, not a rocking horse or a stick with a horse head on the end, but a real horse.  Since that time, horses have been an important part of my life, and, consequentially, have been an essential part of the images I make. When my daughters were small, I gave up horseback riding on a regular basis, and no longer owned a horse, but kept my connection with them through my art.  Then, at the beginning of the pandemic, I was given an incredible gift:  a young horse named "Stormy", whose life I got to share—to train, to ride, and to simply just enjoy.
Posted by Holly Roberts at 2:26 PM No comments: 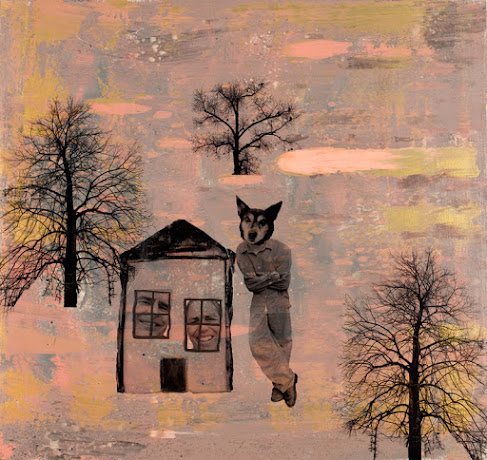 Although "Dog at the Door" is not really a saying(it's"keep the wolf from the door"), it was my way of talking about danger coming, trying to stay safe from problems, worries and difficulties. I did a series of three paintings, all some kind of canine at the door and all about that danger. In  March of 2020 I did another blog about it , Coyote at the Door(Five Trees).  It was interesting rereading the blog and seeing how these paintings still pertained in the little over a year since I wrote it, but also how they didn't.  In the year since, things got worse: George Floyd and Black Lives Matter unfolded, more friends presented with serious health issues, covid raged out of control, the political situation got more and more dire, the capitol was stormed after Biden was elected president and an unremitting drought that continues here in the west, to name just a few things.
But things have also gotten better:  vaccines have been developed to protect us from covid, for the first time in years I didn't get a cold or flu because of wearing a mask, the economy started to turn around, we have a sane president, and best of all, my husband and I, in October, were presented with a beautiful grandson, full of life and promise and hope. Time to open the door and chase that dog away.
Posted by Holly Roberts at 5:37 PM No comments: 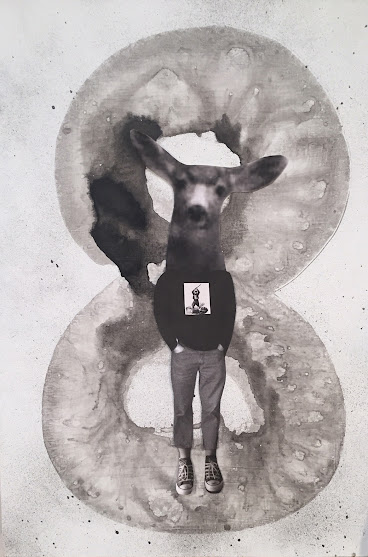 Trying to clean up, my studio a mess of bits and pieces of paper, I almost always come across those scraps of paper that plead with me to use them, "Please Holly,  pleeeeeze, just try us out!".  And since who would rather clean up then listen to talking scraps of paper, I pause the cleaning and begin to move those pieces of paper around, dropping them onto the background paintings I've already prepared.  All those things I've been feeling and thinking about bubble to the surface: violence, vulnerability, innocence, misuse of power.  On the deer's sweatshirt is a small engraving of a man being beaten, and it seemed only right that this image should end up there as a tiny reflection on the state of the world. 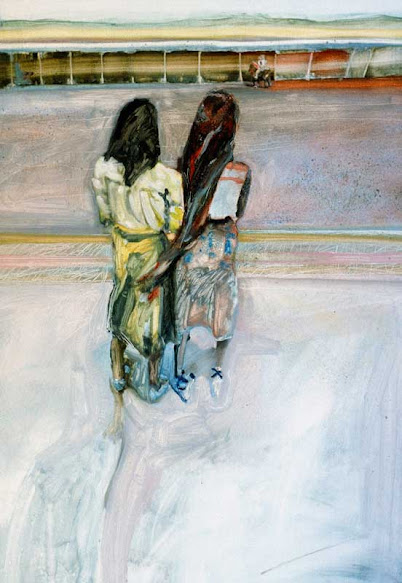 This past week my husband and I attended a memorial service for a young friend who had died from cancer, leaving behind a wife and two small children. One of the people that spoke at the service was his best friend from high school who choose to read a poem he had heard on a blog driving to the service from Denver the day before. It was about friends and friendship. The poem caused me to  think deeply about my friends and what they mean to me, how important they are, and what a big place they fill in my life. Recently my husband and I were away from home for five weeks, and I so acutely felt the lack of my friends--their support, their sympathetic ears, their kindness and concern--that it was almost palpable.
When I did this painting 30 years ago I remember taking the photograph of these two young woman standing together at a horse show.  I loved the way they stood so closely together even though there was plenty of space around them, the one woman's hair flowing into the other woman, her left foot canting ever so slightly. At the time I don't think I really thought much about the women, just that I liked the image of the two, enough to then do a painting from it. It's now owned by one of my closest friends from that time, and that seems right.
Posted by Holly Roberts at 5:49 PM No comments: 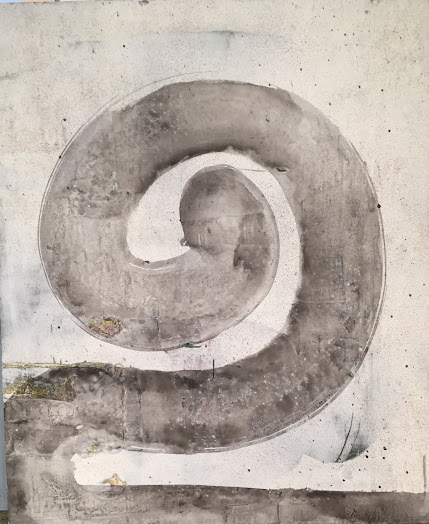 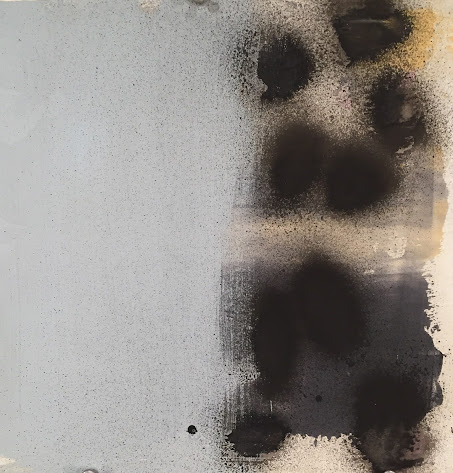 I start my pieces by painting first-always abstracts.  This February I finished eight pieces on small washes I had done in 2014, but had never been able to figure out how to use the paintings, much as I loved them, but was finally able to do so now, 7 years later, and I loved the results ( One Face IIII ).  I was trying to remember how I had done the washes, and really couldn’t.  It had to do with water and a spray bottle and maybe a little bit of rubbing alcohol, and maybe on a surface of that was prepped with dry wall mud.  Maybe—or maybe not. Who knew?  So I started out with my wash brushes and water and paint and a spray bottle of isopropyl alcohol and a number of panels and canvases that I had already prepped, some with dry wall mud, some with just gesso.  Almost all were surfaces that I had painted over of older paintings. My plan was just to “experiment”since I had just committed over $800 to having large panels made for me, and I wanted to have an idea of where I needed to go before I started on the “good stuff”.  What a joke.  Turns out “experimenting” means the same thing as cut lose and try anything you can think of on any surface that you have prepped in the studio and just hope that you remember how you got there because you certainly aren’t taking any notes. Some 20 paintings later I was thrilled with where the water and paint and isopropyl alcohol had taken me, all ready for something new and unexpected to happen on these beautiful new surfaces.

Posted by Holly Roberts at 2:17 PM No comments: 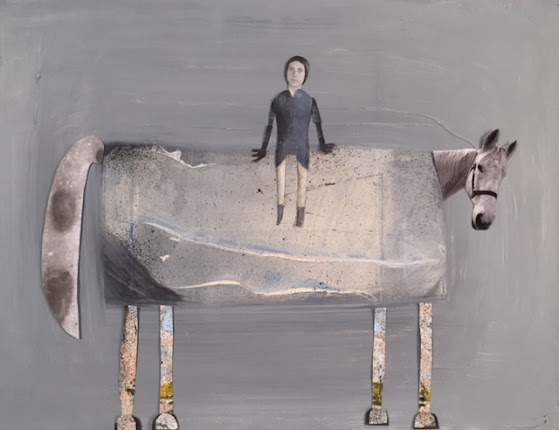 Posted by Holly Roberts at 4:41 PM No comments: