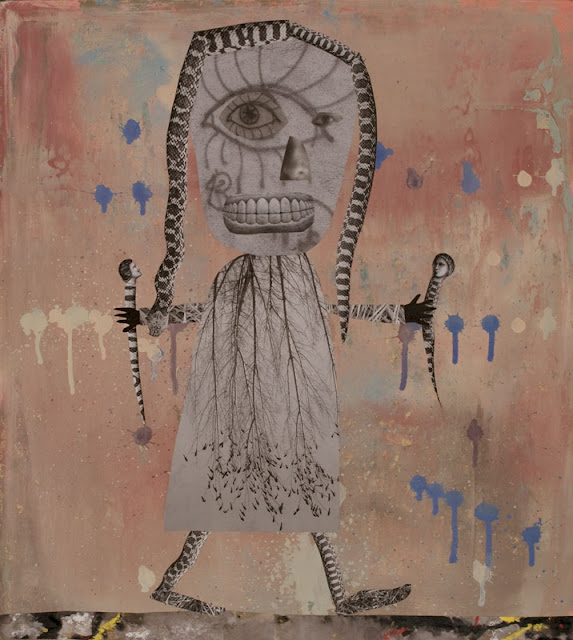 After Adam and Eve ate fruit from the Tree of Life, as bidden by the serpent, what happened next?  Lots of not so great things:  women were doomed to suffer in childbirth and men were forced to toil for their living. Innocence no longer existed in the world and the two sexes stopped coexisting peacefully because of all of the shaming and blaming that went on.  And of course, God booted both out of the Garden of Eden to live miserable, conflicted lives for the rest of eternity.

So--who had to carry the guilt for of all of this?  The serpent's daughter, that's who. So much blame handed down from her parents, what a thing to have to bear! She carries the Tree of Life, upside down now, within her, holding her mother and father in each hand as she walks, giving them a good shake every now and then, letting them know of her disappointment and frustration.
Posted by Holly Roberts at 11:57 AM 1 comment: 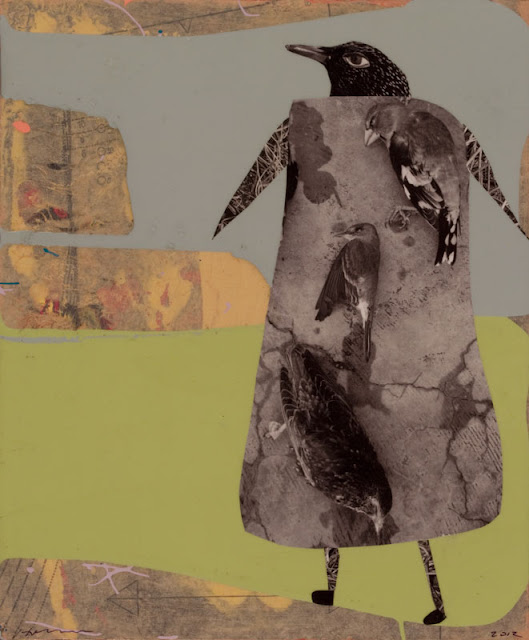 My mother loves birds. At 83, she lives alone with her Aussie mix, Abbey, in a small house 18 miles south of Santa Fe. Her backyard is filled with bird feeders and watering stations. She sits at her dining room table for long stretches of time and through her large plate glass windows watches the hundreds of birds as they arrive to eat and drink, bathe and socialize. At times, even though she has hung shiny, swirly things to detract them, one will fly into one of those windows and die. I've asked her to save those birds for me so I can photograph them. In the past, she has always placed them in small plastic bags and put them in her freezer for me to collect on my trips to Santa Fe.

Over the last several years, her memory and judgment have started to decline. The last bird she saved for me she forgot to put in the freezer, and kept in the garage instead. Fortunately, it was winter, so although the garage didn't freeze, it stayed cool. None the less, by the time I picked it up it was starting to decay. All three of the birds that are "resting" in this image are from my mother, including the one she forgot to freeze. As her memory continues to decline, I imagine these will be the last birds she will have been able to save for me.
Posted by Holly Roberts at 8:32 PM 4 comments: 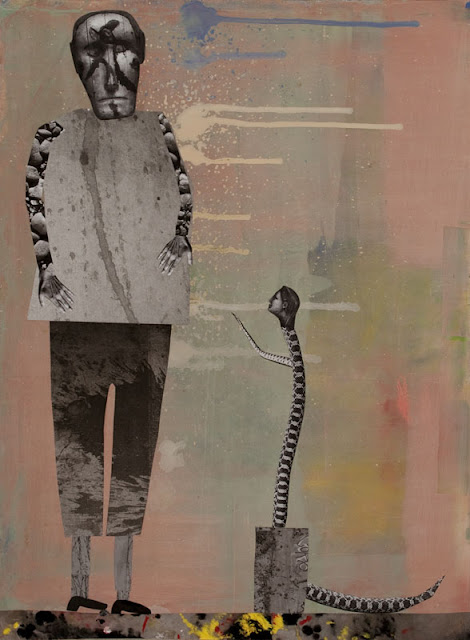 To Scold:To reprimand or criticize harshly and usually angrily.  freedictionary.com

These are the people I scold (in the order of most to least): my husband, my children, and, every once in a great while, my students. I'm always amazed at the power of a scold, and at how harmful scolding can be when it's done on a continual basis. When my children were young and overwhelming in their energy and illogical approach to things, I found myself scolding them often, and then always regretting it afterwards. I almost never scold them now, and when I do, it's more of a gentle reprimand. After all, as young adults, they have the ability to simply remove themselves from my life if they so desire. My husband I try not to scold. It makes for big trouble between us, but sometimes a scold just pops out.

Rarely do I scold my students, but I did while teaching at a recent workshop. With the group gathered in front of me for a demonstration, I found myself suddenly very annoyed at finding a dirty brush left in an open container of medium that should have been covered. The words jumped out of my mouth, "Who did this? This is a shared area and people can't leave things open, contaminated, and dirty!" Immediately, I could see the alarm in their faces, and then their nervousness. It made me separate and apart.  And, once again, I regretted my harsh words.
Posted by Holly Roberts at 7:15 PM 2 comments: 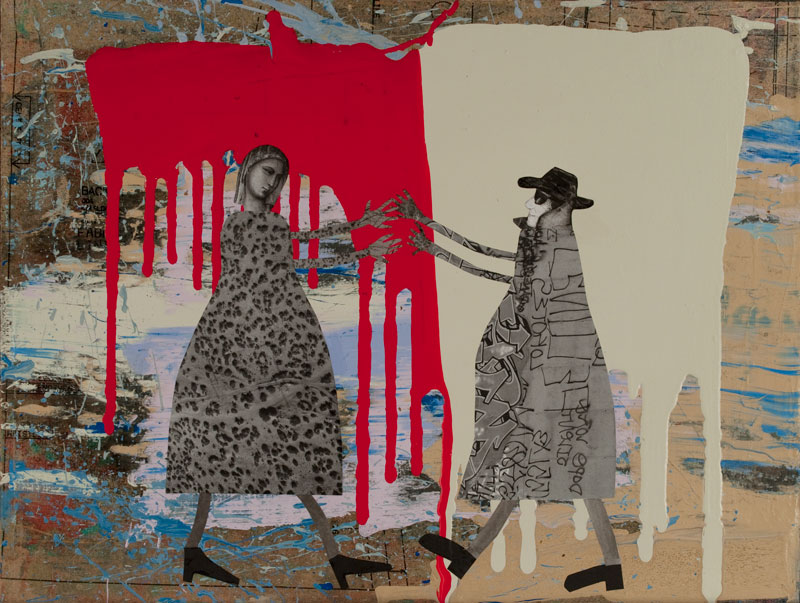 It was a hot day. The neighbors were having their roof re-done: stripped, rebuilt, and then tarred. Working on that roof in June in New Mexico had to be hot, hard work. Ranchera music blasted out over the neighborhood. It seemed like the same song, or at least a variation of it, over and over and over. Annoyed by the incessant music, hot, and already tired, I started to work in my studio, picking up pieces of paper with images on them and moving them listlessly around, dropping them onto the different paintings I'd prepared earlier. And suddenly there they were: two figures dancing to the Ranchera Music-- stiff, quite polite, the man a little scary, but really a nice guy once you got to know him. I tried turning her face away, but then the painting became about fear, and that wasn't right. This was about two people in a strange land, connecting through what they knew and loved: the sounds of accordions, bugles, guitars, and violins, accompanying a soulful singer, a man dressed in tight pants, a white, fluffy shirt, a short jacket and a huge hat, singing about lost love and betrayal, loneliness and pain. http://www.youtube.com/watch?v=x6HcQ-bxaaM
Posted by Holly Roberts at 5:13 PM 1 comment: