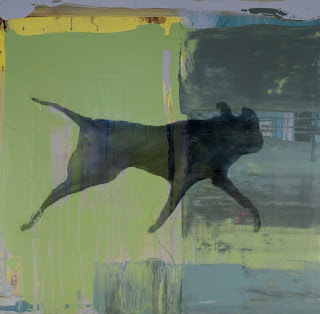 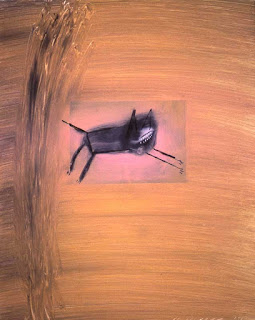 In 1998, when I made "Black Dog Running", I had a large, very nice darkroom here in my studio.  I am a barely competent darkroom photographer, not anyone you would turn over your most precious BW negatives to.  When I made a print, I usually only made one.  Unlike most photographers, I was generally happy with what I had on the paper, having been only too delighted in the magic of the image coming up in the developer, and not being overly concerned with exposure or dust spots or flaws in the photo.  With "Black Dog Running" I made a small, 5"x 7" print from a photo of one of our dogs, and then adhered the print onto a panel, sealed it with polymer, then painted over it with oil paints. I usually finished the painting part in a day since I really only liked painting wet into wet.  I worked this way for almost 25 years.

Now, almost 20 years later, I have developed into another animal. I no longer have my analog darkroom, but instead have a digital one.  Two monitors, a large Epson printer, two scanners and a lightbox are what fill the room now.  I take my photographs with a digital camera(although in the case of "Dog Running" I scanned an older BW negative), and then alter them in Photoshop. It's only in the last few years that I have achieved any kind of skill with Photoshop, and that's after having had it on my computer since 2004.  When I print out an image now I make lots and lots of that image--dark, light, big small, reversed, inverted, etc.  In this case there is an underneath image of the dog that got covered over with acrylic paint, and then another transferred on top of it. The image took me about three-four months to complete.  In comparing the two, I am struck by how similar the two images are, even though they are separated by 18 years and two completely different ways of working.
Posted by Holly Roberts at 12:46 PM 2 comments:


This is from a workshop I gave in 2008 at Anderson Ranch in Colorado.  It was, as most of my workshops are, a ton of fun.  The students all decided that they wanted to write down what I said(over and over and over) for future reference, so they came up with this list, kind of a cheat sheet for when I wasn't around and and they needed to bring my voice back into their art making realities.  Here is what they came up with: 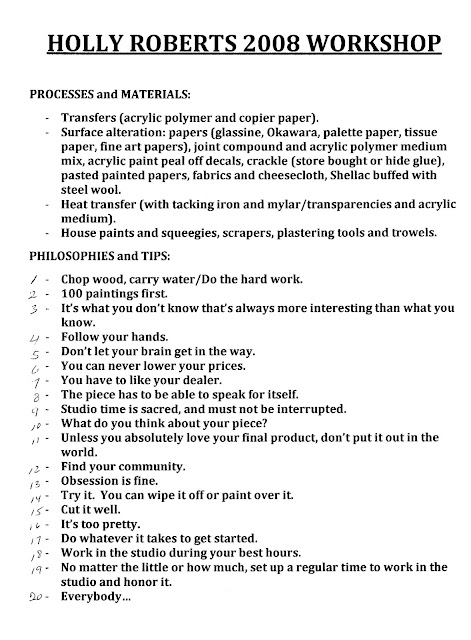 
Posted by Holly Roberts at 5:51 PM No comments: