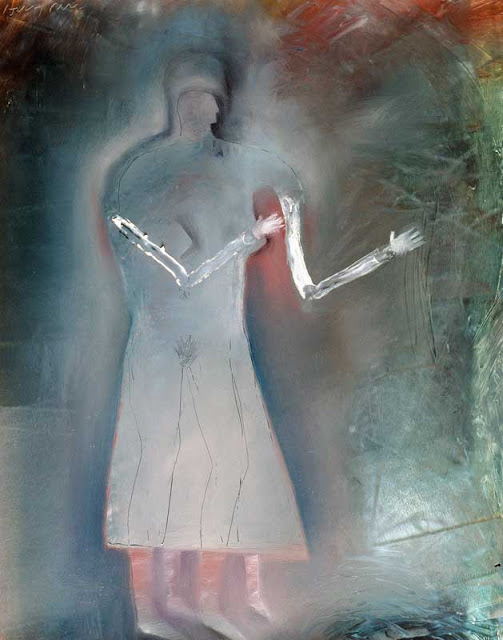 In 1987 I was still forming the vocabulary that was to inform my images for many years to come:  my figures were becoming more and more simple, often with stick like arms that are outstretched, either in an imploring gesture or showing fear or distress.  Although the images were always based on a photograph(I painted with oils directly on top of a black and white gelatin silver print), the mid to late 80's seems to have been the time I started to discard as much of the photograph as I could get away with.  As with Woman with Yellow Arms, there is no photo that I can discern, only the drawn scratched lines which reveal the darks and lights of photo beneath.

In 1987 the world was an anxious place for me.  I was only 35 at the time, and working through many personal issues as well as dealing with the larger concerns of my world.  At that time we had been living on the Zuni Indian Reservation for four years(we stayed for eight), and was I becoming familiar with their customs of masked dancers:  a figure inside a figure, something that I was completely fascinated with(and still am).  When I look at this painting now, 30 years later, I see a love of the painted surface, and a struggle to define a complex personal view through a single figure.

* Woman with Yellow Arms is going to be included an exhibition at the Tucson Museum of Art called "Body Language:  Figuration in Modern and Contemporary Art"(Feb 25-July 9, 2017).
Posted by Holly Roberts at 3:00 PM No comments: