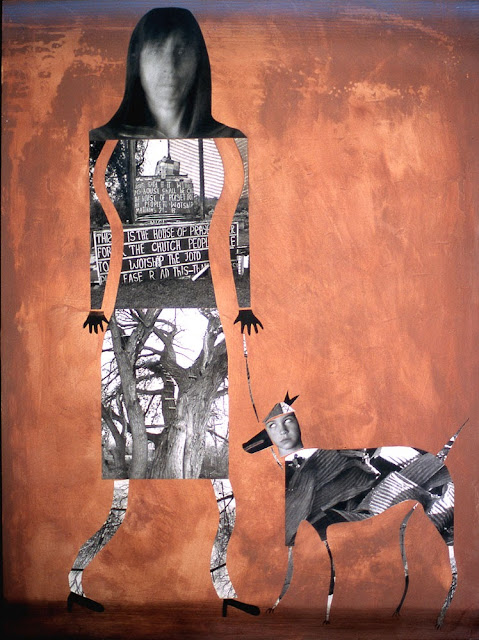 "Art is another form of Prayer" as overheard quoted by Oprah Winfrey.

Woman with Small Dog Watching is a self portrait.  That's my head  sitting on top of a torso made from bits and pieces of the Reverend Dennis's home outside Vicksburg,  Mississippi.  The Reverend Dennis, a World War II Vet, covered the outside of his home with biblical writings painted in pink, yellow, red, and white.  The writings are both his own and quotes from the Bible.  There is no question that for the Reverend Dennis, his art was his form of prayer.http://www.detourart.com/rev-hd-dennis-renowned-mississippi-folk-artist-1916-2012/ 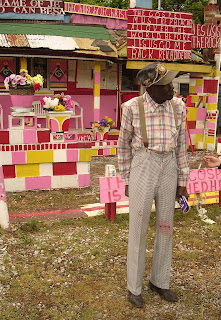 Is art a form of prayer for me, like the Reverend Dennis?  Is it as true for me as it was for him?  I had to think long and hard about this simple statement.  But here's what I came to:  It's where the best of me lives, it's where I am most present, and it's where, when I'm there, I'm closest to the big things that matter most. So yes, I think art is prayer for me. This is what this painting is about: being made of what comes from witnessing the world while being guided by something I can't lay claim to.

Posted by Holly Roberts at 3:16 PM No comments: 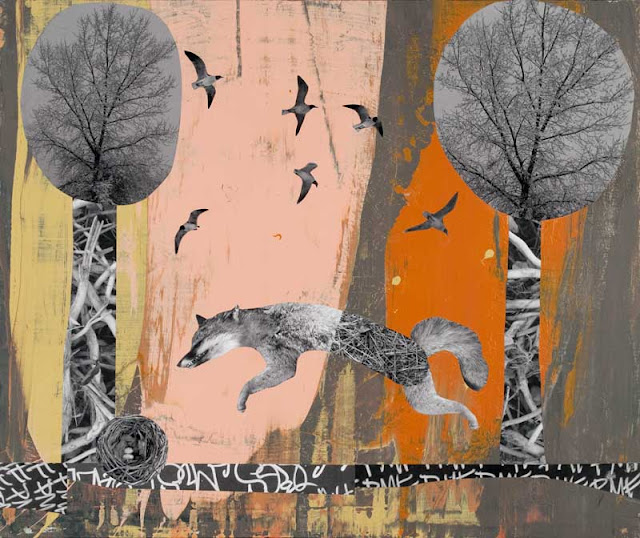 Two things helped shaped me as a child:  riding my horse, bareback and alone, in the rural ranch land around my home outside of Santa Fe, New Mexico and the nature programs on the Public TV Station, PBS.  The shows portrayed a democratic world where nothing was either all good or all bad (except man).  Yes, the lioness killed the newborn baby gazelle, but she had (adorable) cubs to feed.  The programs seemed always to be about the struggle of the animals to survive, be it weather or predators or loss of  environment. An episdoe in which drought causes the rivers to dry allowing the crocodiles to attack and devour antelope with the speed of light as they nervously creep down the dry bank to drink is burned into my brain.  One minute you're just about to stick your nose in the dirty brown water for a needed drink, the next you're being pulled under the water, trapped in the jaws of a prehistoric monster. There is no easy street in nature.

When I would go out on my long solo rides, I would look for evidence of what I'd learned from those nature programs.  The country I rode in was mostly ranch land, so I would see cattle, but not much wildlife.  But still, I was always on the lookout.  Circling birds meant something.  "Vultures" I would mutter, then urge my horse into a canter, searching for whatever was beneath the floating figures. Usually it was just crows flying around, but every once and awhile I would find something dead, most often a cow.  I had hopes of finding much more exciting carrion, but it was alright when I didn't.  I loved  being in a world where mysterious and unknown things were happening, and to be a part of that world all I had to do was pay attention. 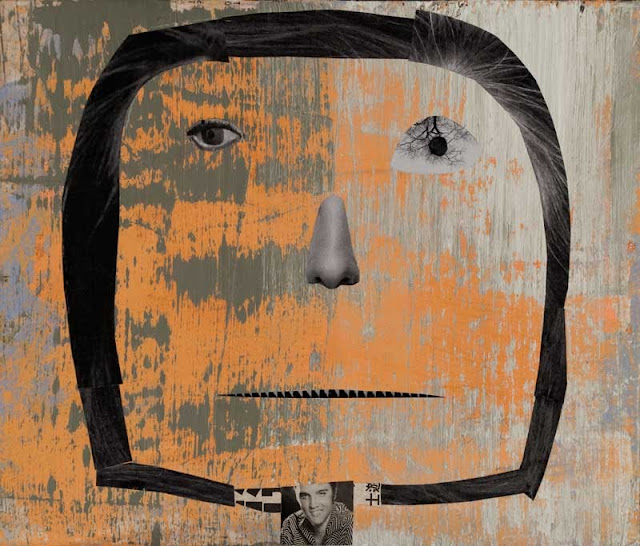 A Saturday morning, an argument with my husband, escaping to my studio to let him know--I don't need you--finding scraps of photos of hair and a beautiful little silver/gray/orange panel that I'd painted several weeks earlier.  I start dropping and placing the the curved hair images on the orange and silver panel. A face emerges. I find a perfect nose and eye, then another eye made from a leafless tree and a tiny black spot.  A mouth that looks like a snake but that is in reality a sliver left over from a photo of a Navajo rug.  Last, a neck made from tiny Elvis from an Asian newspaper of he and Kurt Cobain side by side (why they are together I dont know because I can't read Korean).* I hear the door of the studio open. Its my husband, not sure of his welcome.  I show him the little portrait.  He likes it.  I'm pleased.  We forget about the argument.

* Kurt ends up in another portrait as ears.
Posted by Holly Roberts at 1:11 AM 3 comments: