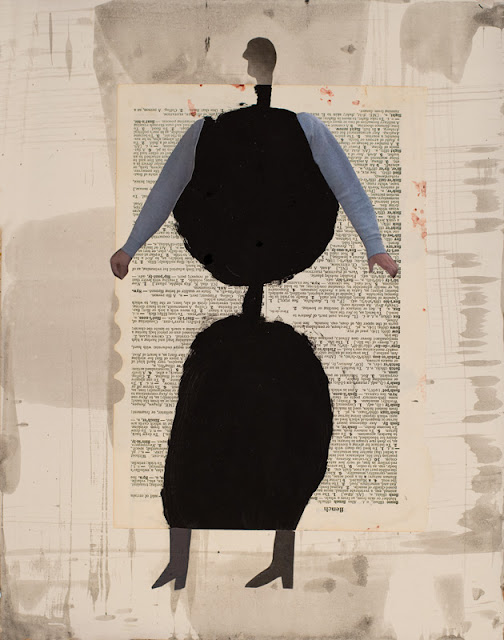 As an artist, I'm always walking the fine line between control and letting things happen.  It's a fine, razor edge kind of a deal. Too much letting things happen and I get a chaotic mess, too much control and I get lifeless.  The first part of losing control happens with my painting:  I push, pull, and throw the paint, completely turning over to whatever properties the paint or surface has--  drippy, stiff, runny, bright, dull or vibrant.  I let whatever feelings I'm feeling take over: angry, sad, happy, bored, indifferent, excited, frustrated, proud. Paint is everywhere, my shoes taking the biggest hit. The next part is building the image--not as wild a ride, but still a delicate balance of finding what works with what might not work; guessing, hunching, thinking, and going back and forth from my collection of photos on paper to the ones on my computer or camera, or to my collection of painted papers, printed pages, insides of envelopes, or scrapbook pads from Michael's Stores. There's a lot.  And if I've been good, and if the Art Gods know that I've really and truly abandoned any ideas that I may have started with, I may just end up with a wonderfully strange and unexpectedly beautiful image.
Posted by Holly Roberts at 5:20 PM 4 comments: 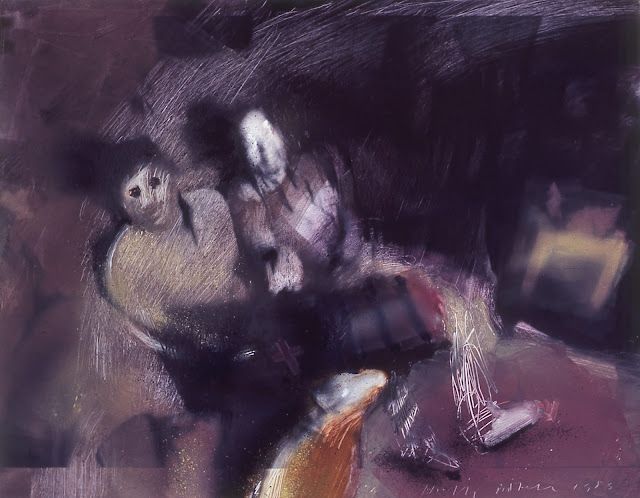 Aside from my innate drive to draw horses, one of the biggest influences I had as a young artist was my mother's marriage to Nick, a Greek man who worked as a waiter at night and painted during the day.  He and my mother married when I was 9 years old.  https://hollyrobertsonepaintingatatime.blogspot.com/2016/07/nick-teasing-1981.html

He was fun, he was a great cook, and he lived life to the fullest. He learned to drive not long after meeting my mother and would drive us cross county in our old pickup truck, recklessly bouncing over arroyos and sagebrush, always stuck in whatever gear he happened to last use, us kids shrieking in the back with delight and fear,  We had dogs and a sheep, huge vegetable gardens, and he was always working (not so expertly it turns out) on our house or properties they had bought. But after 17 years of marriage, it all fell apart.  It was a hateful breakup, full of acrimony and spite.  All that was petty and small in both my mother and in Nick emerged and they would never be friends again.  However, Nick stayed in our lives, more my father than my biological father ever had been. He retired from his job with the state(no longer the bohemian artist)and traveled the world with a backpack full of vitamins and a change of underwear, making friends wherever he went.

Unfortunately, his bad relationship with my mother would come back to haunt me.  In the last ten years of his life, he began to be cold, rude  and abrupt with me.  It seemed that he was confusing me with my mother, and now, with hindsight, we realized that it signaled the beginning of his dementia. He died at the age of 91, peacefully--if death is ever peaceful.  He couldn't see, could barely hear, and his memory was mostly gone, yet one of the last things he told my sister was that he wanted to live to be 100.
Posted by Holly Roberts at 1:30 PM 9 comments: