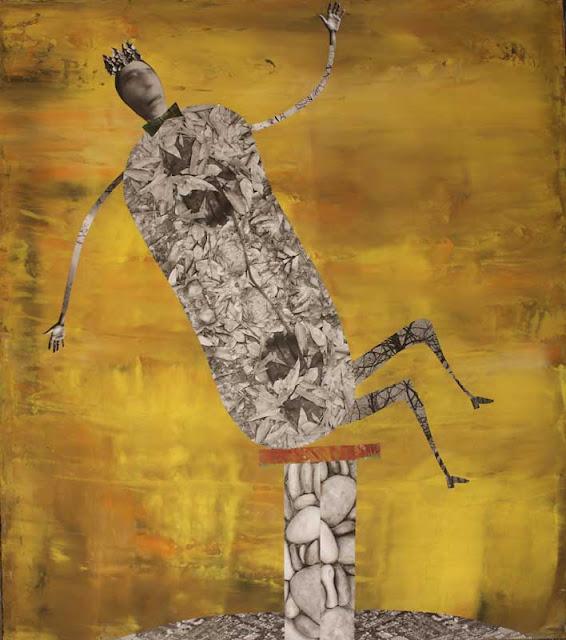 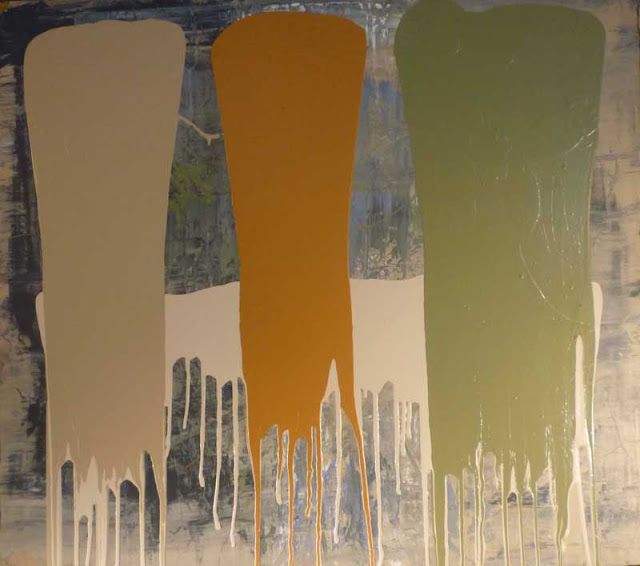 I did Humpty Dumpty in 2009.  It captured perfectly the Humpty Dumpty in all of us(note: my face on Humpty):  precarious, proud, confused as he starts to topple.  I especially loved the bilious background, a color combination that speaks of sea sickness and being out of balance, but quite beautiful.   Alas, Humpty sat in my storage for four years and last week I pulled him out and covered him up. The only evidence of Humpty is the shape of the figure under the green-you can faintly see his head and his raised arm, the rest is  swallowed by the paint. Humpty will become the ground for a new piece, which is of course, is yet to be determined. Because I am so enamoured of the new painting, it may cause trouble when I go to form the image, and it may also have to be sacrificed(painted over) to appease the greedy art gods.

*For those of you who consider yourselves to be true and die hard Holly Roberts fans, I am posting a link to a short(well, not really short,it's 30 minutes)video produced by Catherine Edelman of me talking about my work in my most recent show with her.  http://www.edelmangallery.com/artiststalk.htm
Posted by Holly Roberts at 11:01 AM 3 comments:

Woman with Child and Water 1996 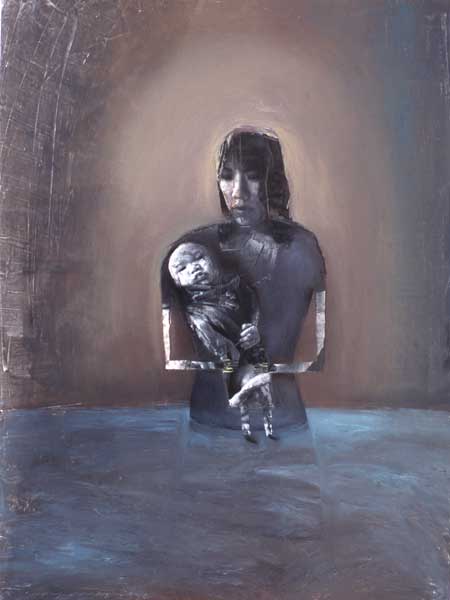 “Only later did I come to understand that to be a mother is to be an illusion. No matter how vigilant, in the end a mother can't protect her child - not from pain, or horror, or the nightmare of violence, from sealed trains moving rapidly in the wrong direction, the depravity of strangers, trapdoors, abysses, fires, cars in the rain, from chance.”
― Nicole Krauss, Great House

“- A mother, a real mother with a little child, thinks day and night about the welfare of the little one in her arms. A mother knows what dangers the child will have to encounter as he grows up. She does not let the father reassure her when he makes light of things and says that the children have to find their own way.
A mother worries, for she carries the burden, and she often sees much deeper than the father just where the child is in danger.”
― Johann Christoph Blumhardt

“Through the blur, I wondered if I was alone or if other parents felt the same way I did - that everything involving our children was painful in some way. The emotions, whether they were joy, sorrow, love or pride, were so deep and sharp that in the end they left you raw, exposed and yes, in pain. The human heart was not designed to beat outside the human body and yet, each child represented just that - a parent's heart bared, beating forever outside its chest.”
― Debra Ginsberg

This painting is about the terrible fear one has as a parent, knowing that something bad might happen--probably will happen--and that you are powerless to do anything about it: your child is born with a hole in his heart which can't sustain him, your son carelessly turns left in front of on going traffic with his brother seated beside him,  your daughter begins to cover her wrists with bracelets to hide the scars of her cutting.
Posted by Holly Roberts at 5:50 PM No comments: 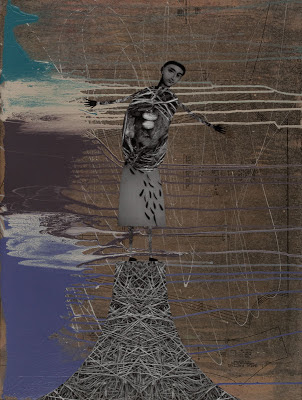 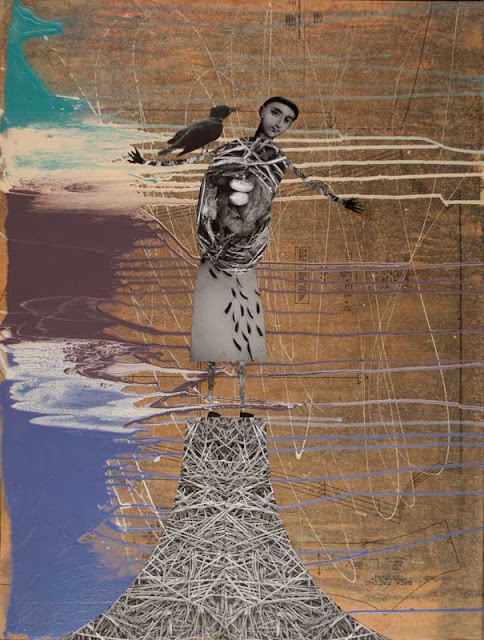 ICARUS: The main story told about Icarus is his attempt to escape from Crete by means of wings that his father constructed from feathers and wax. He ignored instructions not to fly too close to the sun, and the melting wax caused him to fall into the sea where he drowned.  Wikepida

In June of 2012, I finished Icarus.  Not long after that, I realized that his right arm was slightly shorter than his left, and I knew I would have to redo it.  The piece sat on the wall for the next six months, until it was requested for an exhibition.  I had little time to get the piece framed and make the repair, but I knew I had the weekend to correct and varnish it before I packed it to go out that Monday.  As I worked on taking off, and then replacing the arm and hand, something bothered me about the piece, something very low key, but there nonetheless.  The next thing I knew I was pulling out my "birds" folder and looking for small bird bodies to place on that left arm.  The perfect bird ended up being a Kingfisher I had photographed that had crashed into a window, then recovered and flown away.  He had been angry and annoyed, and had threatened me with his sharp beak when I came too close with my camera.

I understood as I attached  the Kingfisher on Icarus's arm that he was trying to warn Icarus, and that Icarus wasn't having anything to do with it.  I loved that the bird was telling Icarus about the dangers of not being careful, having just crashed himself.  He understood the consequences of   recklessness and lack of attention, of what happens when you don't notice the world around you.
Posted by Holly Roberts at 6:22 PM 2 comments: