The tale of Adam and Eve has always been the one bible story that I could most relate to:  how two people, by just being themselves, could manage to so completely screw things up.
The Serpent, "slyer than every beast of the field," tempts the woman to eat from the Tree of Knowledge, telling her that it will make her more like God, and that it will not lead to death. After some thought, the woman decides to take from the tree and eat it. She then gives the fruit to the man, who eats also, "and the eyes of the two of them were opened." Aware now of their nakedness, they make coverings of fig leaves, and hide from the sight of God. God asks them what they have done, and man and woman defer responsibility. The man blames the woman for giving him the fruit, but implies a sentiment that God is also at fault for making the woman in the first place ("The woman Thou gavest to be with me, she gave me the fruit of the tree, and I ate"), while the woman blames the serpent for seducing her to disobedience ("The serpent beguiled me and I ate"). God curses the serpent "above all animals," making it lick dust and go on its belly all its days and to be an enemy of the human race. God then passes judgment for the disobedience of the man and woman, condemning the man to a life of toil and the woman to create new life through painful childbirth, and banishes them from the Garden. (Wikipedia, Adam and Eve from the Fall of Man)

I think it interesting that I chose to use a photo of my head as the head of the snake. 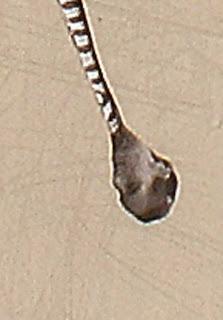 Everything about this story is just so wonderfully complicated and true.  It seems that my husband is always suspicious of what I know, my awareness of things.  He is always doubting what I see.  For him, unusual water on the floor is not something to worry about, just something spilled.  For me it's a burst pipe, a leaky roof, something bad. I always feel badly about knowing too much, seeing what is going on and having to sound the alarm, "I don't think that's a good sound for your car to be making" as his old Subaru thumps away every time he accelarates.  And of course, it's been sounding like that for months, so why worry? And the snake!  That part of me that is always wanting me to know, to find out, to understand!  What a nuisance, what a little dust licker.
Posted by Holly Roberts at 6:38 PM