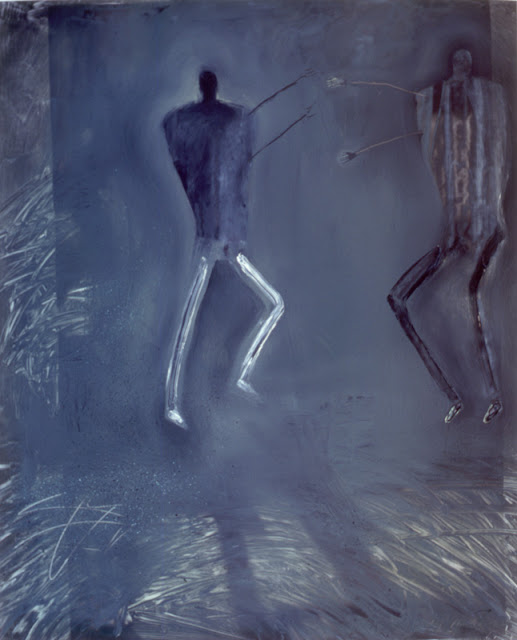 During the summer of 1989 a friend and I had gone for a horseback ride, and during the ride we got into a tremendous argument which started over the use of the term "tits" vs "breasts".  It was a very frightening experience for me because I couldn't pull us out of the blackness of the argument, which went far deeper, of course, then tits vs breasts.  The core of the argument centered around a traumatic event in my friend's life.  Years before, she and a friend had argued, the friend had stormed off, and several days later was found raped and murdered.

What stayed with me was how the memory of the emotions from our fight wouldn't go away, and also, I realize now, how my friend, after ten years, could not rid herself of the blackness of what happened with her friend.  We carry those strong emotions with us for a long time, beneath the surface, but still there, viable, alive, ready to be called up.

Recently, my husband, Bob Wilson, did a large public art piece here in New Mexico.  It was completed this summer, and a short video was made about the process which was just released a few days ago.  At the beginning of the project, one of the city councilors tried to kill it, and that battle is recorded in the video.  What surprised both Bob and I, after watching the video, was how present our emotions over the conflict still are in us:  As I watched things unfold, I found myself becoming very tense and anxious.  My stomach started to churn and roil. Bob reported feeling much the same way.  I remembered this painting and thought it perfect to illustrate those conflicted, angry emotions that I still carry. Here is a link to the video:http://vimeo.com/35518361
Posted by Holly Roberts at 7:44 PM