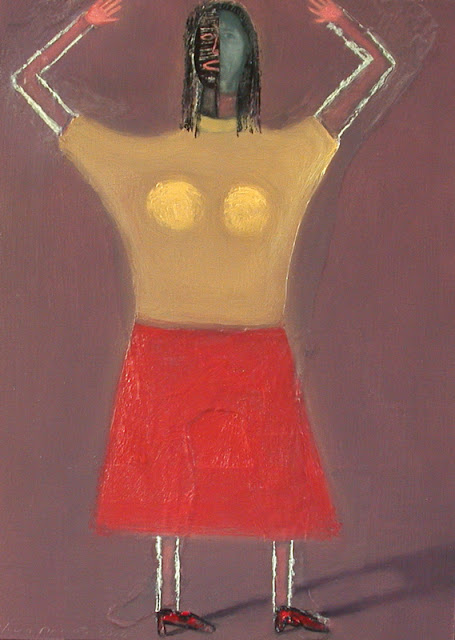 For the past several weeks I've been  encountering obstacles that have seemed almost insurmountable.  The kinds of things that wake you up at 3 in the morning and then won't allow you to go back to sleep because your thoughts keep hamstering in your mind, going around and around, repeating the same crappy, black dialogue over and over.

I can't remember the specifics of what was going on with me when I did this image 9 years ago, but I know it was probably very similar to what I'm going through now, just probably a slightly different set of issues.  I know I was reacting in much the same way I am now.  The usual big four--despair, anxiety, depression, and an overwhelming feeling of helplessness.  What's interesting to me about the painting(and it is a self-portrait of course)is that I don't know if the figure is giving up in a good way or a bad way.  Is  giving up simply accepting what is, seeing the situation as it exists and then going on, or is it giving up in the way that you want to get in bed and pull the covers over your head at 11:00 in the morning, or sit on the couch watching TV, immobile because you feel so discouraged?  In that large area of gray that most of us live in,  I think it's probably both ways, and  there is no hard line between one or the other.  We have to live with the discomfort and chaos that problems bring, but we also have to accept the fact that most of us are living our lives as best we can and that, at the end of the day, these are just problems that will, eventually, be solved.
Posted by Holly Roberts at 4:27 PM