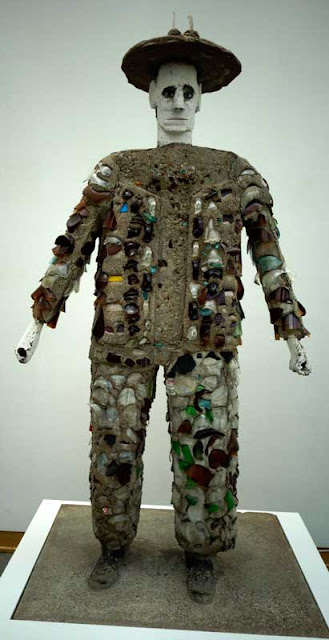 On a recent trip to Wisconsin, I managed to make it to the John Michael Kohler Arts Center in Sheboygan.  It's a small museum(the woman's bathroom was a tiled wonder  https://www.jmkac.org/explore-discover/collections/washrooms-new), and quite lovely.  The exhibits that were up were part of a series of 15 exhibits that would allow us to experience artists whose work is their environment.  All were outsider artists, all were quirky, fun, and interesting.  However, the pieces that moved me the most were work by an artist named Fred Smith(1886-1976). The son of German immigrants, and a lumberjack until the age of 50, he began his sculpture garden on property that he owned that ran alongside Highway 13 outside Phillips, Wisconsin.  He worked on it for 15 years, until 1964 when he suffered a stroke and was incapacitated until he died in at the age of 90.  The figures all are made of concrete, then covered with broken bits of glass.  Most are life sized, or larger.  He is quoted as saying, "Them ideas is hard to explain.  Nobody know why I made them, not even me". The quirkiness, the dignity, and the power of his figures made me feel that I had come home, found a safe harbor.  From what I got from seeing only two sculptures, I can only imagine the pleasure and inspiration for me of actually going to the sculpture garden in Phillips where 237 of his figures exist.  Looks like a trip is in the not too distant future.
Posted by Holly Roberts at 2:16 PM 2 comments: 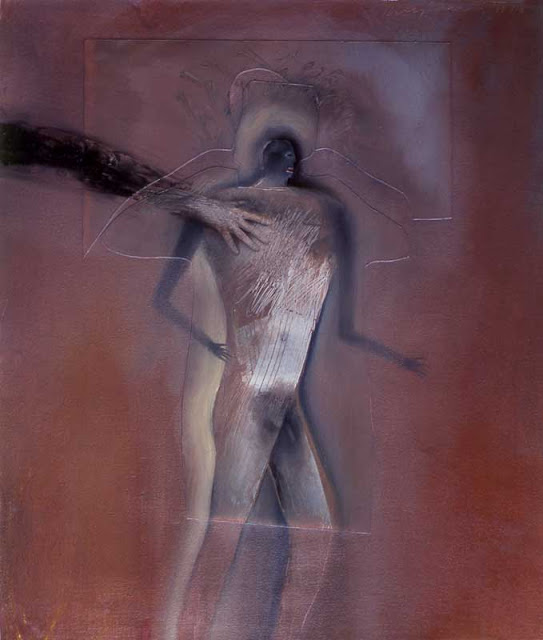 On Monday of this week, my husband's right leg began to swell.  He had been experiencing pain in his buttock, but could tease it away by stretching.  However, this new development concerned us. On Tuesday, he had an ultra sound taken of his leg, knowing that it might be a DVT(deep vein thrombosis), but it showed nothing of concern.  We sighed a collective sigh of relief:  our daughter's wedding was to be held in a few days in Mexico and we were relieved that we would be able to go.  The next day his leg was more swollen, and quite painful.  This time he had an ultra sound done, which showed that he had an enormous blood clot that went down his chest and into his right leg.  Weak with anxiety and fear, he had himself admitted to one of the big the ERs here in town where he was pretty much ignored,  then checked himself out AMA(against medical advice)and was readmitted our Heart Hospital, where a surgeon was waiting with a team to do a thrombectomy(1). Two days and three procedures later he was released from the hospital to begin a new life with daily blood thinners and the knowledge that his body was not the strong, capable vessel he always thought of it as being.We were able to watch the wedding on FaceTime sitting at our kitchen counter in front of my Ipad.  Not what we had imagined, but good enough.

(1)  the emergency surgical removal of emboli which are blocking blood circulation. It usually involves removal of thrombi (blood clots)