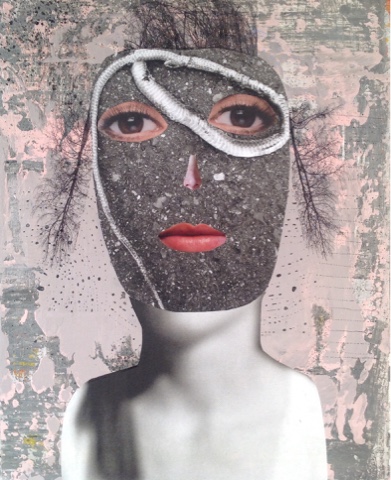 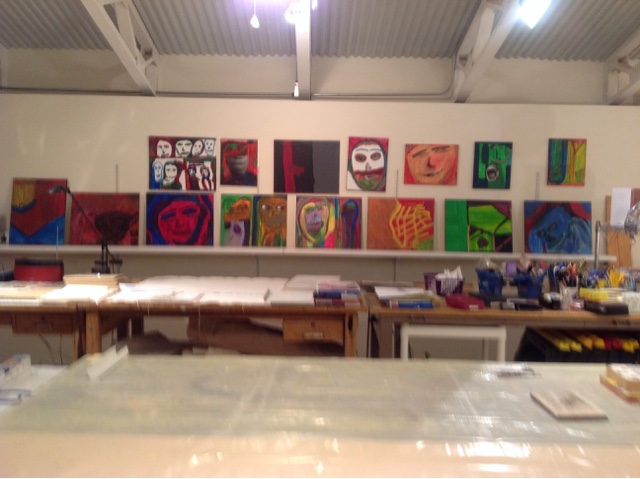 The work of "Izzy" found at the Restore in Asheville, N.C. this last April. 20 paintings at $2 each.
This past fall I've been chasing my tail in the studio.  I'd start something, then jump to something else, then find another process or idea that interested me--usually some new way to do a transfer.  I experimented, messed up, continued, had some success, then would go back to the pieces I had been working on earlier, but still not finishing them.  I'd print things out from my computer to use in my images, then sit in front of the screen and read the news, hunt for full frame Nikon cameras on eBay or craigslist, or look at Facebook posts.  The minutes, then the hours would go by.  Still, nothing done. I found myself consciously trying to make things ugly.  I did, and they were indeed ugly.  I decided to use old nude photos of myself taken when I was in my 20's, then backed out, nervous about having them out in the world. And so I continued to circle, and circle, and circle.
Then a few days ago I thought to pull out the paintings I'd bought in North Carolina from a thriftstore earlier this year.  Only one is signed, but they are all by the same hand--Izzy's.  They aren't great art, but they have a liveliness and an authenticity to them that I was attracted to, and so I ended up buying 20 from the more than 50 that were there.  I removed all my work from the long shelf in my studio and put Izzy's work up. I looked at them for most of the afternoon--really looked.  They were energentic, bold, and unafraid, all qualities that I seemed to have been lacking this fall. I played around with a few of Izzy's portraits, adding mouths and eyes and lips to them, and then, quite unexpectedly I started working on my own pieces.  Within a few hours I had laid out four panels, then finished them all off in the next few days.  For me, they were strange, quirky, and oddly wonderful, all portraits, "Beautiful Woman" being the last of the four.
Posted by Holly Roberts at 4:17 PM 1 comment: 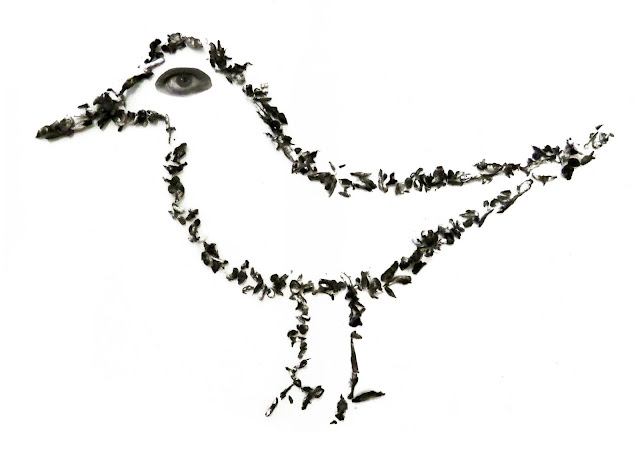 Drawing for "Bird with Spots"

Drawing:  a graphic representation by lines of an object or idea, as with a pencil; a delineation of form without reference to color.  Dictionary.com
When we do one of the transfer techniques that I teach,we end up with millions of little pieces of paper from rubbing the backs off of our photographs.  It's obsessive-compulsive work, and most of us like doing it, at least for awhile. Then we'll get bored, or our fingertips will start to hurt from the constant rubbing(some of the more obsessive of us even getting blisters).  The paper lays around on the table top in a messy, annoying way, but then--something happens in that part of your brain that makes those kinds of connections that you have learned to listen to.  You decide to collect and lay out all of those paper crumbs, then spray them with black ink. What you are left with are thousands of little black rolled up balls of paper. And after pleading not to be tossed in the nearest trash can, those little black balls began to really speak to you. They might, for example, began to want to be a bird.  So, you move them onto a piece of white paper so that you can see them clearly, and before too long, a little bird shows up. With the addition of a photographic eye taken of one of your students, you might then have a tough little bird with a soft, warm, human eye.

Although you love the drawing you've made from the tiny rolled up pieces of paper, black ink and the eye of your student, you probably feel that it isn't quite enough. So, you go through all the smallish, abstract paintings you have(and there are many) until you find one that suits your drawing.  Then, through the magic of Photoshop and another equally magical transfer process, you marry the two, ending up with "Bird with Spots".  You feel good about your strange little drawing and it's final home. 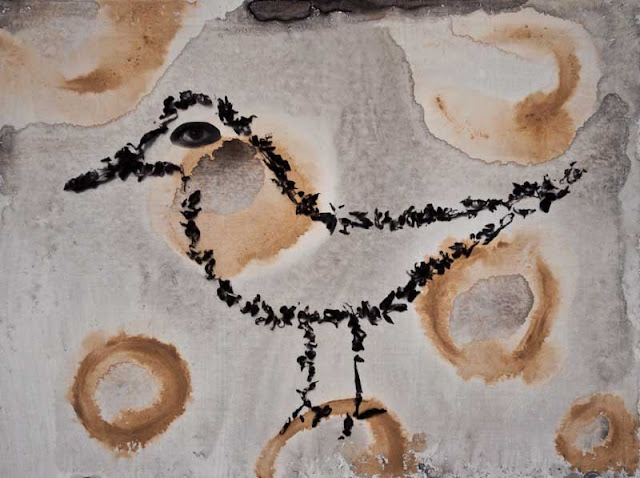 
Posted by Holly Roberts at 5:12 PM No comments: