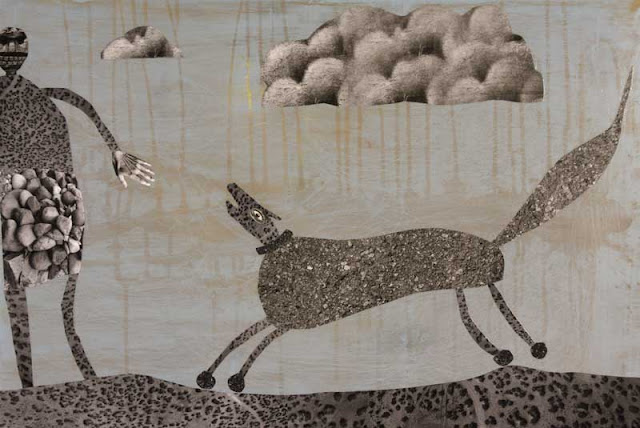 When I fly, I always try to procure a seat that will allow me to take photos. That means a window seat fairly distant from the wing so my view isn't obstructed. I have fallen in love with watching the landscape that passes beneath me, and I'm especially fond of flying over the Western part of the country because of the huge expanses of desert.  I know I'm seeing the bones of the earth. However, as with most things, as much as I love looking and taking pictures of the world below me, I'm also  appalled at how there are almost no areas that we have left undisturbed.

For the photos that I used for this particular image, I had taken an early morning flight from Tucson to Albuquerque.  The sun made the shadows long, which caused the pinon and juniper trees below us  to pop, little, uneven dots with stripes of  roads and arroyos bisecting the trees. I understand now that what I was referring to was the feeling of being a giant, of looking down at the world from so far away.  But at the same time, I gave the giant a body that is made up of the very things he is so much larger than:  he's part of it all.  The dog is made from asphalt with bits of the trees making up his legs and head.  But this isn't a good dog.  This is a road dog, wanting the world for himself.
Posted by Holly Roberts at 4:37 PM