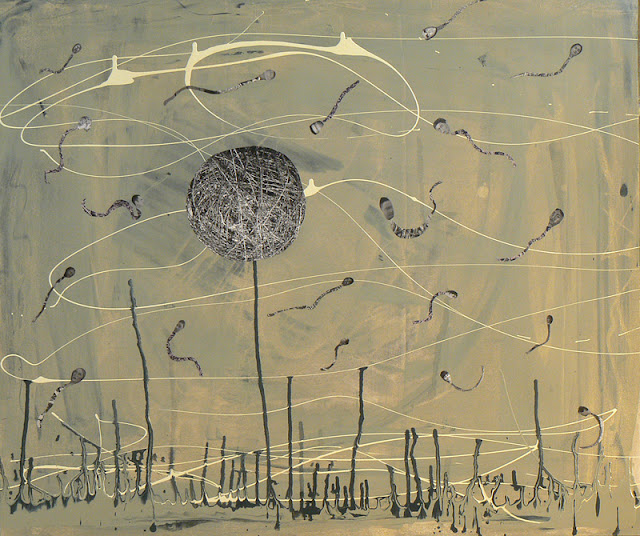 Sometimes you do a painting and you know that you will own it forever, that it's probably not going to be sold or possibly even shown, but you just have to do it.  Sperm and Ovum is one of those pieces.  It birthed itself, starting with the loose, dreamy painted surface, the black drips heading one way and the greenish yellow swirls another.  The Ovum is from a photograph of a large barbed wire ball that I have used countless times(and had it not been so big and unyielding, I would have put it in the back of my truck and brought it home when I first saw it along highway 528 --it was that stunningly beautiful).  The sperm all have different personalities, all with heads of different people I know or liked their image of -- friends, family, or people who just looked interesting that happened my way.

I think if I were better at marketing I would head for some OB/GYN's office and try to pedal Sperm and Ovum, but I know they probably wouldn't want it.  TMI: too explicit and too suggestive of too many things, even though this painting is about the very thing that makes their business-the process of conception(or at least my version of it).  My rational part understands why Sperm and Ovum has never been chosen for anything, but my artist part, which is about five years old, can't understand why  the entire world isn't clamoring for this funny--but also mysterious--painting.
Posted by Holly Roberts at 3:23 PM