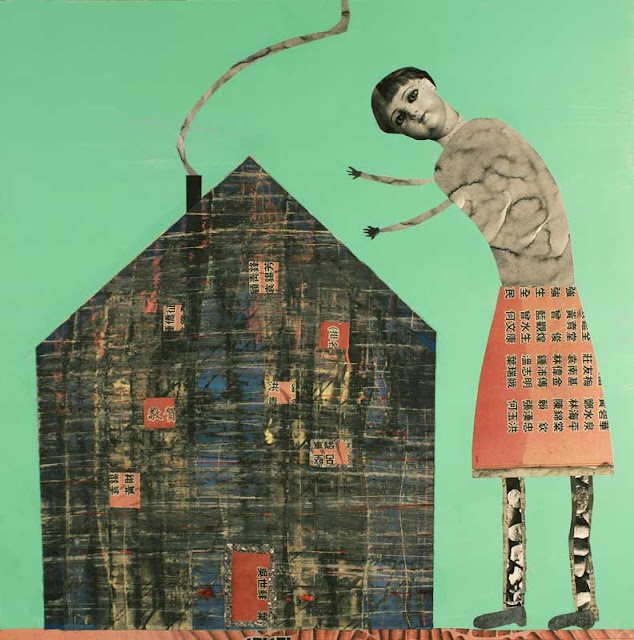 The year following my graduate studies at Arizona State University in Tempe, I was chosen to be an Artist-in-the-Schools.  It meant that I was given a studio and a monthly stipend and in return I would teach a certain number of art classes per week.  I taught all of the grades in their system, from kindergarten to mid-school. The mid-schoolers made me nervous and the really little kids, six on down, were just too young for me to engage.  However, I delighted in the rest of the ages:  I was a hero just by walking in the door with the label of artist, and could do no wrong in their eyes.  I came up with various projects that we worked on together, but really, I was just one artist surrounded by many.

I had a class that has always stood out in my mind and that's because of one little boy.  He sat with his desk facing the wall, clearly separated from the other children.  As we started to work, and I went around helping each child, I noticed that he was perspiring profusely. He had a heavy, dank, little boy odor about him and his clothes seemed not quite clean.  He gave his drawing all of his attention and focus.  When he finished, and I came around to look at what he had done, I was staggered by his image.  It was of a house and a child, but the child was much bigger than the house, and the child was leaning over, a stream of vomit coming from his mouth.  It was a beautiful drawing-- profound and honest and just very well done.  I praised him and told him what a great drawing I thought he had done, and he beamed back at me.  He knew I was being sincere, and he knew that I saw what he had done and heard what he was trying to say-that there was big trouble in his life.

Later, when the class went out for recess, I showed the drawing to the teacher.  She couldn't say much to me, but I understood that this child wasn't in a good situation, and that she was doing the best she could to help.  I wasn't telling her anything she didn't know.  I left that day, and of course, I never knew what happened to the little boy.  I can only hope that his art helped him through his life, and gave him the connection he needed to somehow make it in a hard and unforgiving world.
Posted by Holly Roberts at 5:51 PM