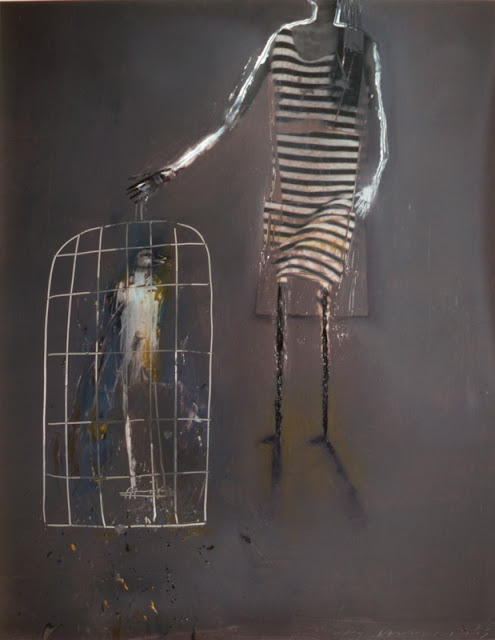 In 1993 I had two daughters, aged 3 and 6, not easy ages(but not as bad as 2 and 5, or 1 and 4).  When I look at the images I did that year they fall into three categories:  horses, figures kneeling and/or suffering, and figures with children(often kneeling and/or sufferingl).  I think the horses were about wanting  power in my life, but not feeling that I had it.  The kneeling and/or suffering figures were about being a parent, and about being brought to one's knees by these small, forceful beings.  They were about not knowing which way to turn or act when dealing with little people whose powers of logic were not good, but who had all the conviction in the world when it came to getting their needs and desires met.

It was a hard time for my husband and me.  Most of the images I did that year reflected our struggle as we tried our best to be good parents.  We worked hard at it, but so often  were overwhelmed.  Today, with 26 and 23 year old daughters, I look back at those years and wish I had them to do all over again.  This time around I would rejoice at the fact that we had our girls close to us, day in day out.  I would know that a three year old's constant tantruming wasn't an indication of how she would be for the rest of her life, but rather just a hint of the spirited and gifted woman that she is today.  Instead of feeling caged and powerless, I would live in the moment and delight at the power and strength of these two unfolding and forming human beings.
Posted by Holly Roberts at 4:36 PM