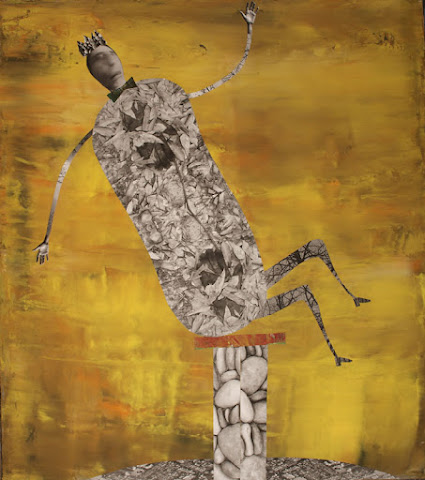 Hubris, to me, is one of those words that doesn't sound like what it is, probably because I want to assign humble to it, and it's the opposite of humble.  To me, this image is about hubris, my own included, but I can't help but see it everywhere.  I did the painting soon after the melt down of 2008.  Talk about hubris!  People confident that they could make money hand over fist to the detriment of us all.  In 2016 our hubris in assuming Hilary Clinton would win the presidential election--we were all so confident that our side was right and would win.  Arrogance in calling the supporters of the other side, "deplorables" as if they didn't matter and didn't have ears. 2020 and we have a pandemic--people assuming that they won't be susceptible to this terrible terrible virus, that, like a cobra, hidden in the grass, can let 100 people go by but then strike and kill the 101st, and kill them a horrible way.  2020--the presidential election--this time the hubris of the sitting president who is so arrogant and confident of himself that he completely ignores the terrible virus and encourages flagrant disregard of the most basic of safety precautions. It causes him to lose the election.  And then hubris in the biggest arena of all--a civilization that isn't taking care of it's home, the planet.  Arrogance in assuming it will be just fine as we pull the planet to pieces bit by bit.  And this will be the biggest, hardest fall of them all, and we might just not be able to put Humpty Dumpty back together again.

Posted by Holly Roberts at 5:05 PM