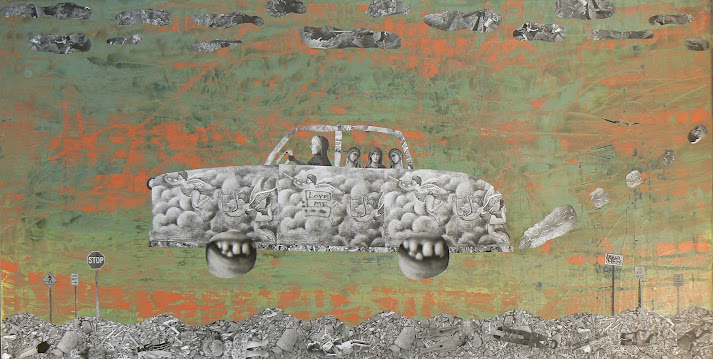 When we first moved back to New Mexico in 1992,  I met and became good friends with one of our neighbors, most probably because we shared the same very black sense of humor.  In 2007 she asked me to do a commission based on a large painting she had seen in my studio called "Mud Truck". When her father had died, her three sisters had attempted to keep her from inheriting her share of his very large estate through various means of trickery and chicanery.  It didn't work, because, after a long court battle, she won.  And this is what the painting is about:  my neighbor, driving her cloud car with her three "pious"( but really evil) sisters in the back floating over a wasteland of bodies and trash.  The car is made of clouds and trumpeting angels, the tires are teeth, the exhaust hundreds of small bodies floating away.  Six signs guide her way,: a pedestrian walking sign, a stop sign, a one way sign(pointing the wrong way), a road closed sign(with graffiti), a do not pass sign, and a sign reminding us not to throw litter in this trash strewn landscape. On the side of the car is writing that says, ironically,  "Love Me". The painting is all about greed, and the triumph of good over evil. She was able to use her inheritance to buy, among other things, a number of my paintings, including this one.  This fall her husband called me to let me know that she had died.  I wish that I would have written this blog before she passed.  I know she would have loved it.

Posted by Holly Roberts at 2:03 PM