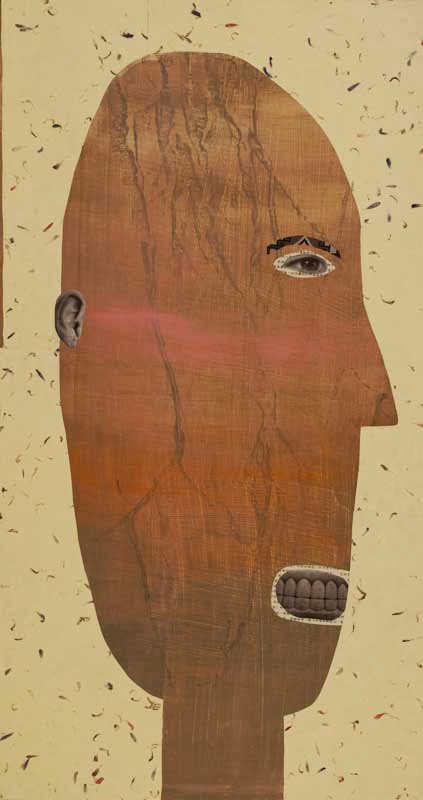 My process is this:  I take paint and move it around on a panel until something happens that looks good to me; that gets me pretty worked up.  The next thing I do is to take paper of some kind, either  photographs I have taken, paper that I've painted on or altered in some way, or paper that has something on it.  Then I take the paper and start to cut it.  The cutting releases something, lets some genie out of the bottle, and allows me to start making the image.  I arrange the paper,  mostly with mushy purpose but sometimes--very rarely--with clear intent.

With Big Head (Listening) the intent was clear almost from when I had the panels cut, which is very unlike me.  There was an idea in my head of big heads (and they are big--the panel is 49" x26"), and that they would be formed as negative space left by the paper.  The paper I used is handmade paper with little flowers in it, given to me by a friend.  The mouth, eye, eyebrow, and ear  were all bits and pieces from my enormous collection of photographs(I have thousands of pieces of photographs that I have tried to organize in my own arcane way.  For example, I have two plastic boxes with just photographic heads.  One box is labeled "not real heads" and the other "real".  Within those categories they are organized by size and sex, either male or female.  Each category has it's own little paper folder to keep it with it's peers).  The motion and action of the existing paint determined the title of this particular big head.  With Big Head (Listening), it was the pink paint sweeping from one side of the head to the other, starting with, or ending at, the ear.

Posted by Holly Roberts at 2:55 PM