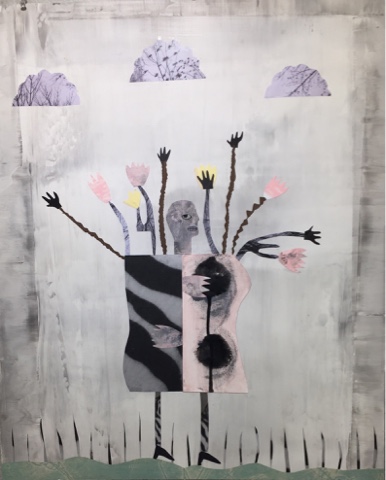 "Woman with Spring" 2018
In sharing a workspace with seven other people, I've come to realize how much I need the space and solitude of my own studio.  Because my method of working has evolved over the years, I hadn't really realized what the key ingredients were to my making an image until I found that I didn't have those things.  They are 1. Lots and lots of space(I mean 7-8 large tables space)so that I can spread out and make a mess, and then leave the mess. 2. Not to have to think about what other people are doing or thinking or saying. 3. To be able to go in and out of the many moods I evolve through (among them irritability and frustration) without worrying about other people's reactions. And 4.  To be able put up work in progress and look at it, often for weeks or months, until I feel it's done.
As we've progressed through our time here, I've found myself stealing as much space as I can and working early in the morning or on weekends when few people are around.  I've learned to tune out much (but not all) of need for approval and attention from the other artists I share the space with.  And I've gone ahead and finished pieces in a few weeks without the luxury of living with them until I'm sure they are finished. And that may not be such a bad thing.
Posted by Holly Roberts at 6:42 PM