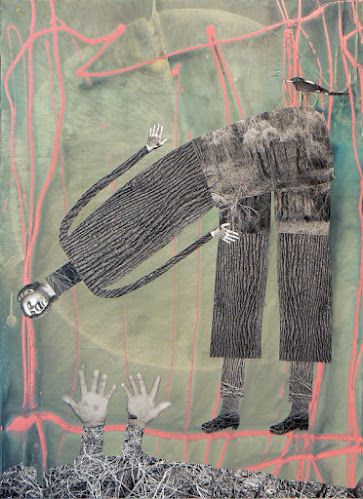 In 2008 I did a residency at Hollins University in Roanoke, Virginia. It was the first time I had ever lived for an extended period of time on the East coast, or had lived in a climate that wasn't Western. The forests and the greenness were completely new to me, and I tried to get to know the area a little better through biking and on my daily jogs and walks out from the school. I photographed lots of trees, along  with the leafless kudzu, which covered huge swaths of the forest, choking out the native species. This piece evolved as a reaction to the forest, and the destruction of it that I saw in and around Roanoke.  The Forest Mother, whose body is made of the trunks of the incredible trees I found all around me, is crying as she leans over a body hidden in the forest floor, whose hands reach up beseechingly. The image is about loss and despair. 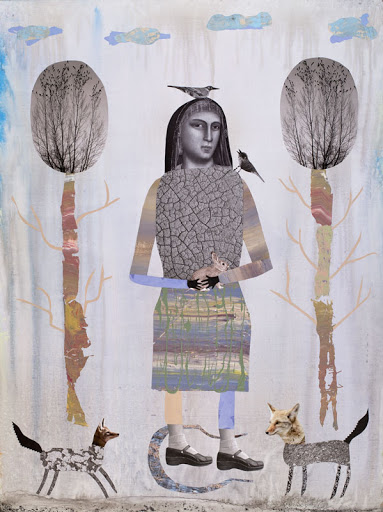 This more recent Forest Mother, I did as a spin off from another piece, which I blogged about last month in a blog called Transformation. The piece resulted from the middle image, which I thought at the time to be too sweet, but I still liked certain elements of it.  This Forest Mother emerged, and was much more at peace than her predecessor, done 13 years earlier.  With her two guard coyotes and snake at her feet, a rabbit in her arms, and two birds perched on her shoulder, she has an air of calmness and wisdom and seems to be saying,"I'll take care of you wild things, not to worry". When I compared the two, it was interesting that this Forest Mother would be so much more positive than the one done in 2008. I think Forest Mother is less about the state of the big world, and more about my smaller world, a considerably more pleasant place to be than it was 13 years ago.

Posted by Holly Roberts at 4:48 PM