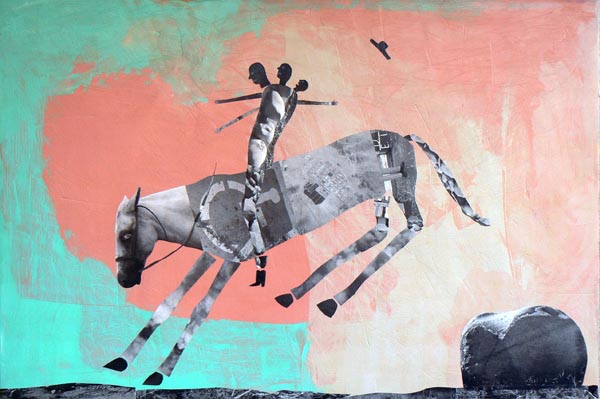 Kids in other parts of the country went to ball games with their dads, or concerts in the park, or maybe the circus, but in Santa Fe, New Mexico, we went to the Rodeo.  I admit, the cotton candy was a big draw for me, but, sticky sweet stuff or not,  I loved the entire thing:  broncs and bulls slamming out of their chutes while their riders leaned back, raking the animals shoulders with spurred heels, hoping to last for 8 seconds;  trick riders and barrel racers galloping around the arena on beautiful horses, always at full bore, and at times,the bodies of the horses came so close to the ground that they seemed to defy gravity.  I never thought to worry about the necks of the running calves as ropes swirled out, landing loosely just behind their ears, then tightening so that they flipped to the ground while the horse slid to a stop,  the rider jumping off with a small rope held between his teeth to secure the animal's ankles. Once released, the calf would get up and wobble away as the cowboy coiled his rope and mounted his horse.

Lurking underneath the excitement and fun was the ever present threat of danger, the very real possibility of serious injury or even, every few years, death.  It gave the evening an extra boost, like the ominous storm clouds that would come up over the mountains to the east as we sat in the dark under the bright lights,  lightening flickering, thunder mumbling . When it would become clear that one of our  warriors was wounded,  the crowd would become completely silent as the medics knelt over the twisted cowboy or the gored clown.  An ambulance would drive in through the soft dirt and the still body would be loaded in.  Once through the big double gates at the south end of the arena, the ambulance would start it's siren, ear splitting at first, but growing fainter and fainter as the ambulance raced away.

Posted by Holly Roberts at 6:27 PM