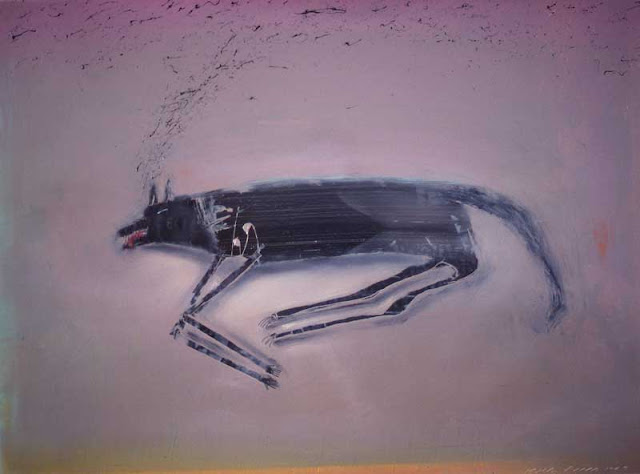 Dusty came into our lives 13 years ago.  She was about six months old, and one of two remaining pups from a neighbor's litter.  Her mother was a black lab, and her father, a German Shepard. She was timid and hid behind her larger, more robust brother.  But, we wanted a female, and so we chose her.  She had never been on a leash, never been out of the backyard that had been her home for six months and was skin and bones, the brother clearly getting all of the food.  We put a collar and leash on her and started out down the road. She jumped and bucked and resisted us, choking on the leash and throwing herself on the ground, but by the time we had gone the 1/4 mile to our house she understood what being on a leash meant.  We brought her into the the backyard with our other dog and she was so frightened  that she defecated.  When we fed her she inhaled the food, and this would always be a problem with her, gulping her food down so quickly that she would vomit soon after unless we spread the dry kibble out on a flat cookie pan.

For thirteen and one half years she lived with us.  She adored all nine year old girls because that was the age my daughter was when we got her.  She was a good dog, with some quirks, like biting the neighbor through the fence as he irrigated his pasture.  She had great dignity and patience, and raised our next dog, a Dalmatian puppy, with care and love. She was a beautiful dog, and whenever I would see wolves on TV they would remind me of Dusty.  She watched over us.

Over the last several years she developed arthritis in her hips and cataracts in  her eyes.  She began to have more and more difficulty walking and started losing her balance, falling easily when she would  come around a corner or when one of the other dogs would brush against her.  Poops would drop out of her without her knowedge.  I knew her time was running out when she defecated as she ate one morning, losing her balance, and then landing in her feces, unable to pull herself back up. We called a Vet, a woman, and arranged with her to come to the house.  On that last day, we gathered around Dusty while the Vet gave her several injections:  a tranquilizer to relax her, then another injection to end her life, except that her heart wouldn't stop beating so she had to give her another, this time directly into her heart.  It still beat, Dusty wouldn't give up, but finally, she died."Crossed the Rainbow Bridge" as the Vet said.

I found this image today, done several years before Dusty was born  Like many of my images it is prophetic--looking like Dusty with her Lupine head, her black torso and her long, thin legs.  Inside the body of the dog is a photograph of a young girl with her eyes closed.  I like to think this was what  Dusty dreamed about  as she left us--that nine year old girl who brought her into our lives so many years ago.
Posted by Holly Roberts at 5:35 PM