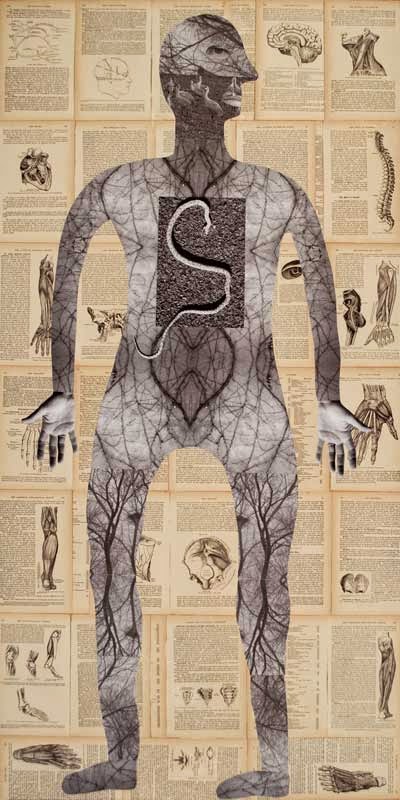 In the Book of Genesis of the Hebrew Bible, chapters one through five, there are two creation narratives with two distinct perspectives..... In the second narrative, God fashions Adam from dust and places him in the Garden of Eden where he is to have dominion over the plants and animals. God places a tree in the garden which he prohibits Adam from eating. Eve is later created from one of Adam's ribs to be Adam's companion. However, the serpent tricks Eve into eating fruit from the forbidden tree.   Wikipedia

I often talk about creativity as being much like following a trail of breadcrumbs through a dark, dense  and overgrown forest.  In the case of creating "Adam's Rib" the breadcrumbs were there, but the trail was long and arduous, and the crumbs often few and far between. I knew that I wanted to connect the images from an old Gray's Anatomy book that my husband had discarded and I knew that I wanted to make a large, standing, figure from mirrored photographs of trees and vines, but I wasn't sure of anything much beyond that. For months, I cut and moved, and cut and moved, never really happy with where I was going.  Finally, from the Gray's Anatomy book, I began to form a pattern of images that corresponded with the body parts of a standing figure. I started to see the branches of the trees and the vines as a vascular system, and I began placing the pages next to where they would be(loosely) if they were in the body.  The figure became feminine, and I could see her ovaries and reproductive system in the pattern of the vines growing on a stuccoed wall.  The face became partially formed by a grouping of Sandhill Cranes and more tree branches, and I realized that, for me, the Sandhill Cranes were representations of a primitive and feminine nature.  Although the image was strong, it still didn't seem quite right, and then I came home from a walk with my mother with an image of a dead snake snake in my camera..  The last crumb was that image  http://hollyrobertsonepaintingatatime.blogspot.com/2014/05/snake-2014el-dorado.html  and it was the addition of the snake that gave me the clue to the title--Adam's Rib.
Posted by Holly Roberts at 5:04 PM