I'm in the process of re-organizing my studio, which is a euphemism for spending a lot of time avoiding going through years of things that have piled up.  Every corner of every room of my studio has a stack of something that needs to be decided on(as a result, I've done several lovely little paintings while "experimenting" with materials that I didn't know what to do with).  One of the first real things that I did that wasn't pure avoidance was to open up a drawer that had 27 paintings inside--my "To Destroy" drawer.

It was heartbreaking.  Some of the pieces had technical issues and others were not fully resolved.  But mostly there were a number that were just too big, too complicated, and too difficult to deal with in terms of content.   They were multiple panel pieces which were based on grids of large gelatin silver prints that I had then over painted with oil paint.  They were difficult to print as photos because they were so large, hard to set up to paint and then really hard to paint because of their complexity and size.  They were hard to photograph and frame, and very difficult to show people because of the multiple panels.   Most were done in the early 90's.
Some of them are quite beautiful.  As I stood and looked at these images I was in awe of the young woman who, 20 years ago, put her entire heart and soul into tackling these big, difficult paintings to create something that she had never seen before. Those were the days when I would stay up until 2:00 in the morning, trying to finish the piece, and would then continue to paint as I slept so that I would wake up exhausted that next day, still trying to resolve the problems I had encountered the night before.  I pulled a few out of the destroy pile that I just couldn't bear to see go under, and then slowly and carefully tore the rest up. 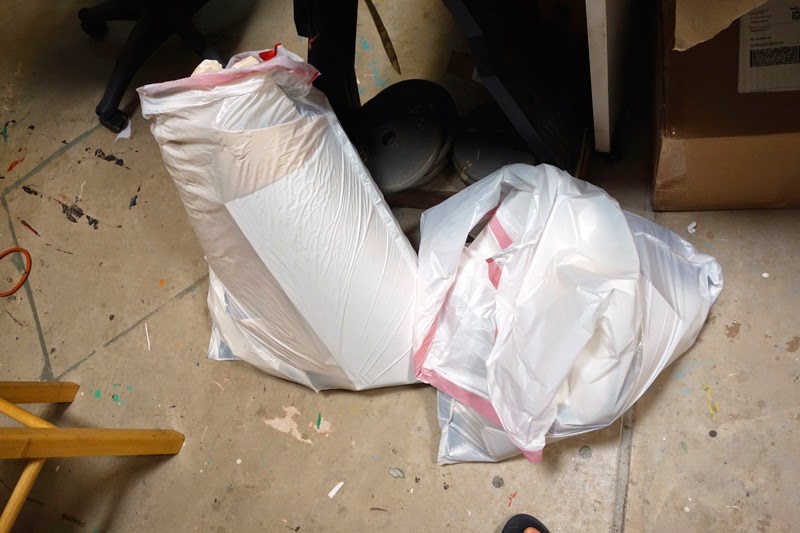 Posted by Holly Roberts at 3:36 PM