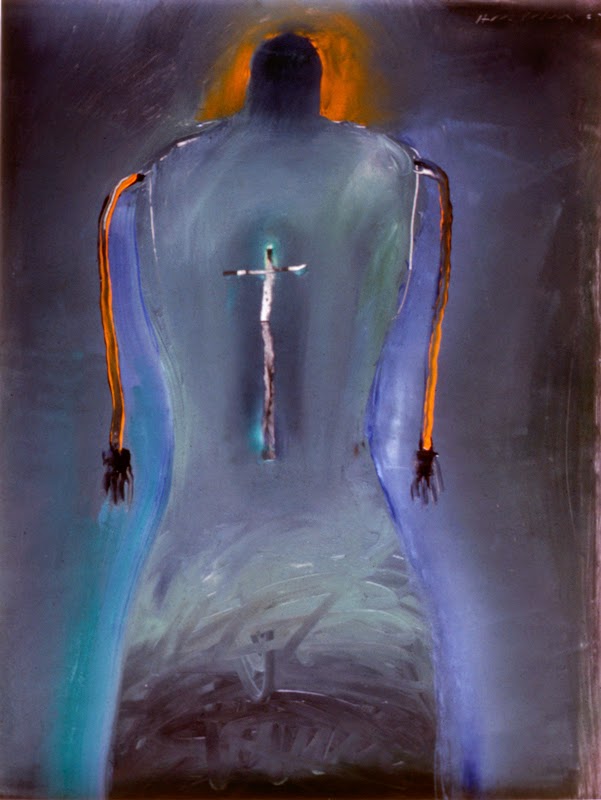 The under-photograph that this image is painted on is of a friend of mine named Karen Mountain. At the time the photo was taken, we were hiking in Utah, and had gone into some beautiful cliff dwelling  spaces.   The photo was of Karen walking through the soft, mounded dirt in the cave, blurry because of the long exposure.  As I worked, I couldn't make her figure work within the painting, but, gradually this figure started to emerge, completely obliterating Karen.  I was just finishing up when the phone rang. It was Karen, calling me from Texas.  She was crying, and having a hard time explaining to me what had happened.  Finally I came to understand that her boyfriend, Sam Baker, had been blown up while sitting in a train waiting to go to Machu Pichu.  The terrorist, a woman and a member of the Path of the Shining Light had placed a bomb in the overhead rack and it had gone off, severely injuring Sam and killing people all around him.

Recently, a friend, (on his way down to Mexico) and I were talking about the dangers of travel in Latin America and I mentioned this incident.  A few days later he sent me the following link:  http://www.npr.org/2014/05/06/310089151/sam-baker-finding-grace-in-the-wake-of-destruction