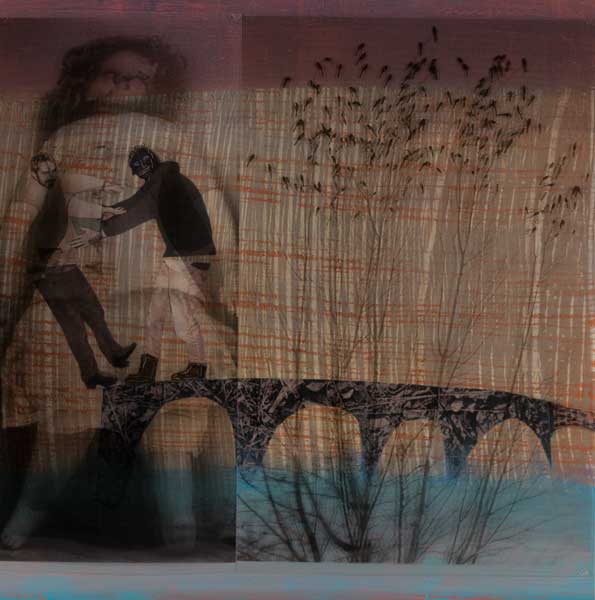 At my local favorite thrift store one Sunday afternoon I discovered 20,  8 1/2" x 11", 50 count, unopened boxes of ink jet transparencies.  The IJTs are clear acetate sheets with a thin coating of some chemical which allows them to go through an ink jet printer without rubbing off.  Once in my studio, I began to experiment, printing out different photographs on the IJT, then figuring out ways to adhere them onto my painted surfaces.  I loved the way the images floated on whatever I put them on, revealing what was underneath--unlike anything I had ever seen.  I began using using the IJT exclusively, and decided to buy an Epson 3880 so that I could make larger prints(the Epson 3880 is a huge desktop printer that takes up lots of room and isn't cheap).  I also invested in more boxes and several rolls of larger IJT paper, in all different sizes.  There were lots of finicky problems that developed in working with the IJT,  and I realized I was clenching my jaw so hard that one morning I woke up and found I was having difficulty opening my mouth. However, not really a problem--money, health, whatever-what do they matter when you're an artist and you've discovered something new?

The first part of Boys on a Bridge was done in 2005, when I was making the transition from photos with paint on top to the reverse.  It was about two boys playing/struggling on a bridge, one just about ready to go off.  Although I was pleased with the painting, it was a transition piece, and sat in my studio for six years before I decided to try laying the IJT images over the boys and the bridge, in this case a photo of an old, soft doll along with one of trees full of black birds. The image became about a bad event where the birds exist as bad omens of what was about to happen, and the doll is a witness who has shared some similar, terrible fate.  Once the piece was finished, I had it up in my studio for about six months, but decided that because of technical problems the painting had to go and I took it apart.  It no longer exists.  I'm still working with the IJT, but without quite the same fervor and excitement.  It's better for my jaw this way.
Posted by Holly Roberts at 9:58 PM