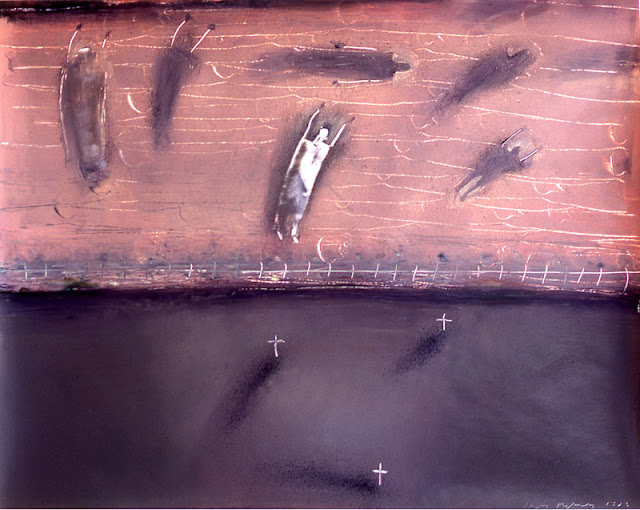 As a child growing up in Santa Fe, my favorite museum was the Folk Art Museum http://www.internationalfolkart.org/ .  At the Museum there is a permanent display(given by Alexander Girard) that came about in my later childhood, and I loved visiting it.  In one corner, there is a painting of a scene in a cemetery done by a Haitian Folk Artist.  I found the painting mysterious and beautiful, and I've continued to visit it over the years. Later, in my twenties, I visited Haiti with friends and found it to be a very harsh and frightening place. There was a dark foreboding about the country and it's people which made perfect sense to me after knowing the cemetery painting so well.

In 1986 I suffered a miscarriage.  It was my first pregnancy and I had put off getting pregnant until I realized that if I waited much longer my body would just be too old, so I took the plunge.  I was very nervous about having children, especially babies, with their clingy natures and their mysterious needs.  In spite of my fears,  I had a sense that it was something I needed to do, even if it was just because I was so afraid of those tiny, powerful, little beings with the creepy soft spot on top of their heads.  After the miscarriage I was almost relieved, off the hook--I didn't have to go forward with this dangerous  project that I couldn't back out of.  However, a bigger part of me grieved, and I found myself doing a painting about that small soul leaving, blasting off to the stars with the other babies who, like him, hadn't been able to stay around.
Posted by Holly Roberts at 4:11 PM