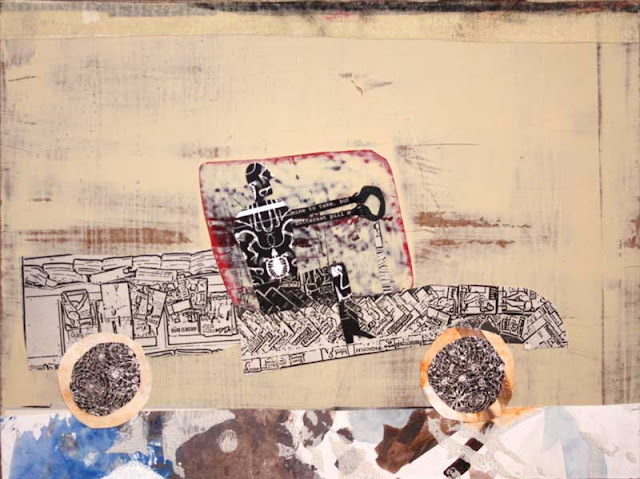 I'm in the process of starting a new body of work.  It's scary.  I don't know what I'm doing, and on a daily basis I slide between elation and despair.  Once or twice a week I have to admit that I'm really lost, and that I don't know where I'm going or how I'm ever going to get anywhere.  I fiddle around with things that take my interest, but don't really help me get anywhere, like buying 24 packages of  paper at Walmart on sale for 25 cents a package, then experimenting to see how the paper glues and prints.  Terrifically exciting, I know, but I will probably just end up with lots of packages of blank paper taking up even more room in my very crowded studio.

When I look at Bookmobile I marvel at how it came about.  I did it while teaching a workshop at Anderson Ranch in 2008 and everything in it I did as a demo or as an experiment to try something new.  I didn't agonize over it, or fret, or avoid getting going, I just did it, with a circle of students watching as I demonstrated different things.  I love looking at it now, almost four years later, with the figure made of bones and writing on the arms that says "Mine to Take" on one arm and "Bittersweet pills" (not planned) on the other.  The truck itself is made from an old fifties illustration of books-perfect for a bookmobile. I wonder to myself, "Did some other person do this little painting?  Someone who knew exactly what she was doing, and without much fuss, just did it?"  Whoever she is, I sure wish she would show up and give me a hand.
Posted by Holly Roberts at 9:47 PM