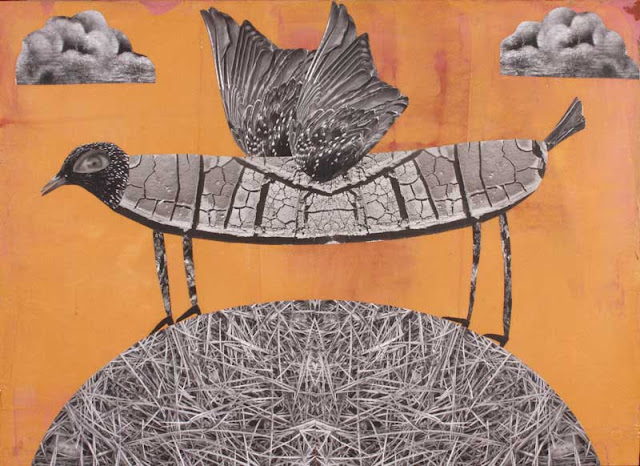 The Phoenix  is described as a bird with a colorful plumage and a tail of gold and scarlet (or purple, blue, and green according to some legends.  It has a 500 to 1000 year life-cycle, near the end of which it builds itself a nest of twigs that then ignites; both nest and bird burn fiercely and are reduced to ashes, from which a new, young phoenix or phoenix egg arises, reborn anew to live again. The new phoenix is destined to live as long as its old self.  The Phoenix's ability to be reborn from its own ashes implies that it is immortal, though in some stories the new Phoenix is merely the offspring of the older one.   Wikkipedia

It's been a long and hot summer so far for most of the country.  However, for those of us in the West it's been a little more intense. On the news a few nights ago a graphic was shown with little orange flames on a map of the United States indicating where fires burned.  At that point, there were 53 fires burning from Montana to New Mexico.  It made an alarming sight.  In New Mexico we had the largest forest fire in the state's history, the White-Water Baldy Fire in the Southwestern part of the state.  Closer to home, the Romero Fire burned at the North end of the village of Corrales, where we live, jumping the Rio Grande River to destroy almost 400 acres. We dodged a bullet-the expected high wind gusts of up to 50 mph never happened and the fire was contained within a few days with no destruction to homes.  The air can be thick and soupy with smoke.  At times we can't see to the end of our road, and it's not unusual to wake in the morning and find ashes covering everything outdoors.  My body responds with a polite, dry, hacking little cough that never seems quite to go away.

Posted by Holly Roberts at 4:59 PM