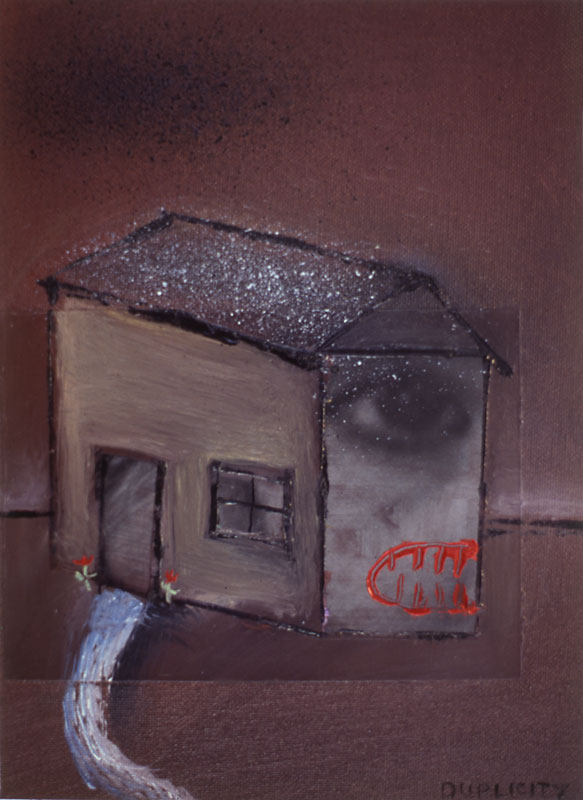 Duplicity:  Deliberate deceptiveness in behavior or speech.  The Free Dictionary

I find it interesting, now, 18 years after making the Seven Deadly Sins, that I had both deceit and duplicity on my list.  They are really almost interchangeable.  Duplicity is about deliberately misleading someone and deceit is the practice of deceiving or misleading.  When I think back to what was happening that would cause me such distress, I realize that it's all about my experience with a New York Gallery which happened over about five years, from 1989-1994.

The gallery was in a beautiful space in Soho, and was owned by a small woman with jet black, very big hair piled on top of her head and curling down the sides of her face(a wig I later learned) . Always stylishly dressed, she was the epitome of what the New York Art Scene was all about: power, money, and attitude. I had two one- person shows with her over the four years she represented my work.  Her stable of artists was impressive, and I was proud to be  part of her gallery.  .

However, there was one problem, and that problem was that just because she sold our work, that didn't necessarily mean that we ended up with any money. She thought it enough that we were in her beautiful gallery and that she worked so hard for us, plus she was allowing us to be part of the New York City Art Scene, no small matter.  And she did work hard, placing my work in numerous private and public collections and traveling with it to Europe for the art fairs there.  There was just that tiny problem of her not liking to part with "her" money.

After several years of "the checks in the mail" promises and me not receiving anything, I finally pulled my work out of the gallery with her owing me quite a bit of money.  I wrote her a long letter and got an immediate reply back from her lawyer telling me they would take me to court if I acted on my threat of exposing her to the art world.  I got my father to write a lawyerly letter which she ignored.  In desperation,  I went to a friend  in Chicago who was an important photography collector and told him my story.  He listened carefully, then put a call through to her gallery.  He and the gallery owner chatted for a short while making pleasantries, then in his wonderful, crinkly, old man voice, he mentioned that he had Holly Roberts sitting here in his office and that I had mentioned that the gallery owner owed me quite a bit of money.  Over the phone, they worked out a deal so that I would be paid $500 per month until the debt was paid off.  About a year after she had finished paying me off, he called me from Chicago to tell me that she had declared bankruptcy and that the gallery was no longer in existence. *

*Having just googled her name, I found that she is back up and running a gallery in NYC that is"more private in nature without a public space" and that she is a "private dealer and consultant with public visibility".  Beware!
Posted by Holly Roberts at 1:26 PM