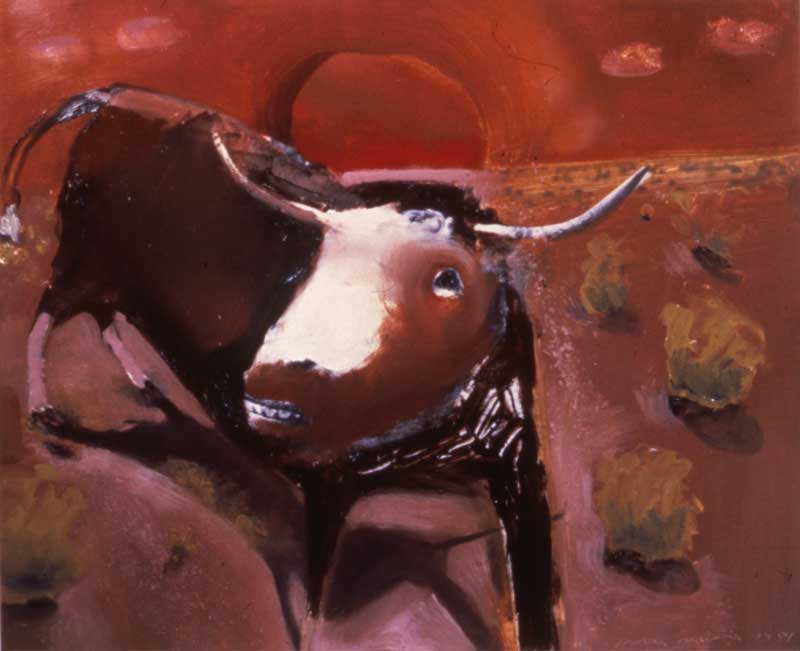 I did this image in the early 1980's.  At that time I lived on the Zuni Indian Reservation, and would often make the long drive between Zuni and Albuquerque.  We traveled on a two lane black top from Zuni to Grants, then picked up I-40 to head on into Albuquerque for shopping, the airport, whatever we couldn't get in Gallup or Zuni.  On this particular trip I happened to pull over at a  wide place in the road that we would sometimes stop at just before we got to the intersection of I-40.  On one of the fence posts (all fences are barbed wire with either metal or wooden fence posts) I saw a steers' head stuck onto the fence post.  It was askew, titled to one side.  It hadn't been there too long, the eyes still looked back at me.  A few crows sat on the nearby posts, waiting to start in. I had my camera, photographed the head, then proceeded on.

30 years later I wonder what that head was doing there.  Had someone poached the steer, then stuck the head on the fence as a kind of sticking their tongue out gesture, or had someone just wanted to get rid of a steers' head they had riding around in the back of their pickup?  I didn't think of it at the time, just took the photo and went on my way.  Later, when I printed the head out and started my painting, I found myself bringing him back to life, alive and well in a vibrant New Mexico landscape.  The painting went to my first New York City show where it sold, and, hopefully keeps on living somewhere in that area.
Posted by Holly Roberts at 6:10 PM

Email ThisBlogThis!Share to TwitterShare to FacebookShare to Pinterest
Labels: Steer