Woman with Jesus and Cigarette 2006 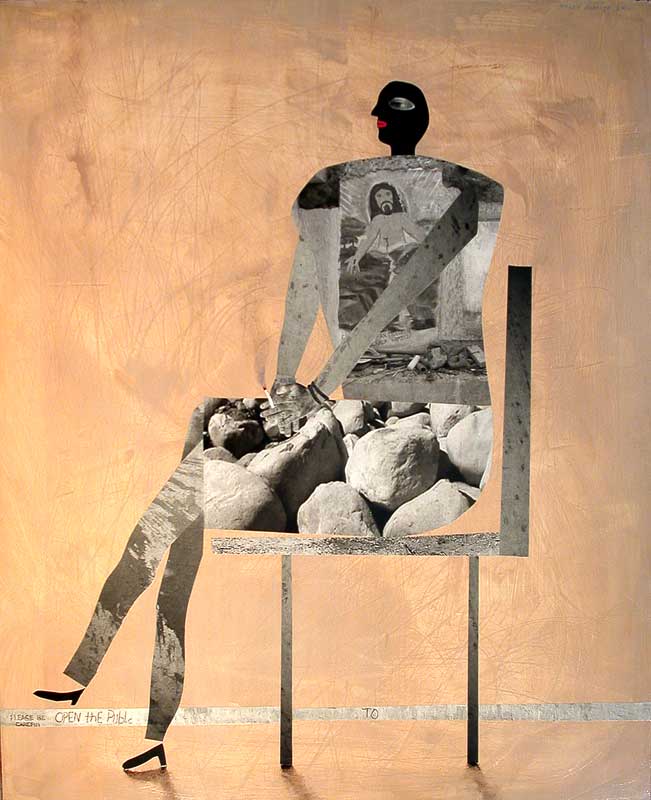 When I was a child we had neighbors who were for all intents and purposes my grandparents even though they weren't really.  Joe died of lung cancer when I was 18 or 19, Jane a few years later of the same thing.  I can remember Jane coming to visit, sitting on the high stool at our kitchen counter, a cigarette in one hand, legs curled around each other, smoke curling up around her face as she discussed the world with me, my mother, and my stepfather, "Nickie" as she liked to call him.  After they died, I missed them both tremendously, especially Jane.  I think they were in their late fifties or early sixties when they died, close to the age I am now.

This woman showed up in 2006.  I pieced her from photographs of many things:  boulders from a trip to Colorado, the cement floor from the parking garage where my husband works, my hands, and Jesus, taken from a painted wall along the highway on that same New Mexico to Colorado route. She's relaxed and confident.  She thinks that with Jesus inside her she will be okay, that nothing can harm her.  Under her left leg is a little warning which says, "please be careful".  But she doesn't need to pay attention, she's got Jesus.
Posted by Holly Roberts at 2:15 PM