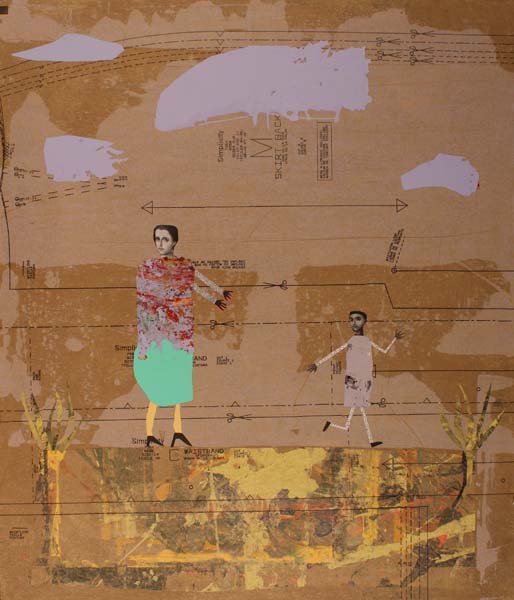 I have no sons, and I am a daughter, so my experience of mothers and sons is only observed, not known personally.  I am married to a man who, like almost every man on the planet, has a complex relationship with his mother.  My older brother and I share the same mother, so I have known that relationship for almost 58 years now.  And then I watch the male world:  men who are powerful, men who are babies, men who are good and kind, men who heal and men who destroy.  I wonder what kind of mother each one of those men had.

This mother longs for her son, but I don't think it's a good kind of longing. Notice her feet aren't moving-she only makes the motion of caring, but doesn't really have to follow up. The son is child sized, but has a man's head.  He appears to be trying to get away, but doesn't look very distressed. The background lines-sewing patterns-create a kind of chaotic directional order: Come back, go away, leave me. Stay. I can't live without you.  I'll get you!  No I won't.  I didn't mean that. Yes I did. The son stays just out of reach, but will never really leave her sight.  I'm not sure they can survive without each other.
Posted by Holly Roberts at 5:28 PM